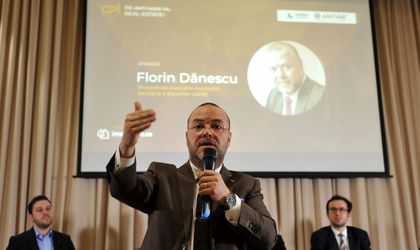 The bank lending costs in Romania will grow due to controversial draft bills that are being discussed in Parliament, including an initiative to cap the interest rates computed by banks and non-banking financial institutions (IFN), warned Florin Danescu, the head of the Romanian Association of Banks (ARB).

Danescu said that there were four draft bills that will impact the costs of bank loans going forward. He cited a draft bill signed into law by president Klaus Iohannis earlier this week through which 70 percent of the provisions of banks will be taxed.

“In Romania, if you post losses, you pay taxes. (….) The impact goes up to the decision of investment, of granting loans,” said Danescu, during a conference organized by the association of property evaluators ANEVAR and Imobiliare.ro.

On the draft bill that aims to cap the interest rates on loans and penalties, Danescu suggested that the access of Romanians to bank loans might be limited as lender could decide to grant loans only to customers that pose the lower payment disruption risk.

According to the provisions of the draft bill, the interest rate enforced by banks will be capped at maximum of 2.5 times compared to the key interest rate published by the National Bank of Romania (BNR). In the case of IFNs, the annual effective interest rate (DAE) will be limited to 18 percent.

“It has been said that there were many initiatives of this kind in Europe (…) 14 states don’t have any kind of law, while in other 14 countries there is legislation that covers the price excessiveness and is linked to the average interest rate on the market,” said the chief of ARB.

Danescu pointed out that there will be an increased “psychological pressure on the market and on the key interest rate” if the caps on interest rates are approved. This could also lead to an increase of inflation, according to Danescu.

Another controversial draft bill aims to eliminate the foreclosure order for loans, which applies for debtors that can’t keep up with credit repayment.

Danescu said that there are 6,000 cases of this kind, adding that banks might have to go to court to obtain the foreclosure order.

“Studies show that it takes up to 3 years to obtain the foreclosure order in court,” said the ARB head, adding that for a RON 70,000 loan, the cost in court to secure this order might reach RON 20,000, according to studies.

The head of the banking association said this cost will also be reflected in the final price of new loans.

Danescu also talked about a separate draft bill through which the debtor could end up being allowed repay the debt by paying two times the price at which the debt collector bought a non-performing loan for banks.

He said that across Europe, legislation is being drawn by the European Central Bank in a bid to remove barriers on the sale of receivables, adding that Romania is going the other way.

Talking about the importance of the banking system in the economy, Danescu said that 90 percent of all financing granted in Romania comes from banks.