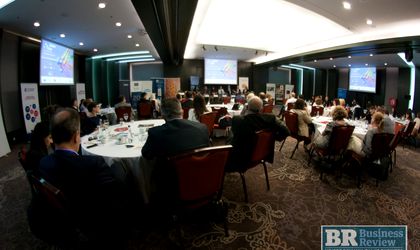 Country Focus Community Forum is a 2-day event, dedicated to the most dynamic foreign investors’ communities active in Romania. Here are the main statements of the second day. The insights from the first day can be seen here.

Pierre Moussy, economic counselor, Embassy France in Romania: Services account for 50 percent of the added value in Romania. The industry accounts for one quarter of GDP, but the share of the automotive has gone from 2.5 percent to 13 percent in the last 10 years, he explained. On FDI, French companies are number five in Romania. On direct employment, we are top 3 with more than 100,000 direct jobs created directly, said the representative of the French Embassy.

“Romania was a low cost country but this is changing,” said Moussy, adding that the human capital is one of the strong points of the economy in the eyes of French investors.

Romania has a convergence rate of 57 percent of the EU average, said Moussy. “The cost of labor is growing as twice as fast as productivity,” he added.

“Everything related to R&D and innovation should be increased,” said the representative of the French Embassy. An increase in vocational training will help to redirect the 25 percent of the workforce from agriculture to other services.

In the first 5 months of this year, we had 20 missions of CCIFER focusing of French firms looking to invest in Romania, said Coste.

IT companies are planning to increase their headcount in Romania, said Coste, adding that the industry and engineering firms such as Michelin and Faurecia have continued to expand their operations in Romania.

Groupama has 2,100 employees in Romania, out of which 600 are collaborators. “The penetration of insurance in Romania is very low,” said Coste.

“The Romanian market provides growth. We grew by 16 percent last year, and this is not possible in a mature market, like the French one. We even surpassed China, last year. I don’t know whether we will manage that this year too.

Secondly, diversification of risk in our business is important.

Thirdly, in Romania we have access to a lot of talents. Flexibility is a top quality. Our Groupama Romania office is a source of best practices from Romania to other countries and I want to say that Groupama won the international award of innovation in our group.

There is a lot of talk about AI and we started doing it in Romania due to the mathematics skills of the local staff, and this was not possible in France or in Romania. We made the biggest investment in the insurance sector in Romania.

The setbacks: predictability of legislation is important. Then, infrastructure. It is also important for insurance. Mortality is nine times that of France, because of the infrastructure, weather, age of the cars, but at the end of the day it is high.

Last week we signed five polytechnics and five schools in France and we will have the first promotion of French students in Romania and Romanian students in France being awarded a double diploma.”

The economic growth of Romania is robust, and the decrease of net investments is not a reflection in the overall development of the economy, said Bloch.

“Romania is a country which is very important for us. (…) Today, 99 percent of our clients are Romanian clients,” said Bloch, adding that companies are expecting for investments in infrastructure. “There are still many sectors that are very competitive in Romania,” said Bloch.

“What we see today, we see constructions for the moment leading,” said the executive, adding that manufacturing is another sector financed by banks. Health, agriculture are other areas in which banks keep financing projects.

“We have capital and we are ready to finance large investment projects,” said Bloch. “What we see today is a lack of demand, we don’t see a large number of clients coming directly,” said the banking executive.

Eric Stab, CEO, Engie Romania: “The energy sector is undergoing massive transformation, not only in Romania but across the world.”

The Romanian energy sector needs EUR 3 billion a year to keep modernising. He said that billions of euros was invested in exploration and production of hydrocarbon resources, more than EUR 6 billion in renewable sector, but also in the electricity infrastructure.

“The Black Sea might become the next El Dorado,” said Stab, explaining that billions of euros are needed to extract gas from this area. Decentralized generation of electricity was mentioned as one of the emerging fields on the energy transition trend. He said that this trend is gaining ground in Romania on the companies’ side.

The energy intensity of the country is twice the European average, said Stab, talking about the need for energy efficiency.

He said that smart homes and investments in smart cities are new trends that are taking ground in Romania.

US ambassador Hans Klemm: “President Iohannis’ visit in the US was a great success for both countries.”

The major themes in meetings with US official – the reaffirmation of the strong alliance and partnetship between Romania and the US. The US strongly appreciates Romania’s presence in Afghanistan and Irak. “Promoting the security of our two countries,” one of the themes of the Iohannis-Trump meeting. Fighting corruption in Romania, another topic. We want to see increased trade between the two countries in both directions.

“We will escort a delegation of 30 Romanian companies in the US,” said Klemm, adding that state secretary Ilan Laufer will also be part of the delegation. The event is called Select US Conference.

There is a lenghty discussion in the White House for Romania as a provider of energy for the region, said the ambassador.

“Some 90 percent of Romanians applying for a visa obtain it,” said Klemm.

Ilan Laufer, state secretary at the Ministry for Business Environment: “President Trump gave Romania as a positive example in the region, on the allocation of 2 percent of GDP for defense.”

“It’s time to bring more US investments in the region and internationalise Romanian companies in the US,” said Laufer.

InvestRomania is the single point of contact for foreign investors looking at Romania. We are also providing support for state aid schemes.

“The prevention law is ready,” said Laufer. I think it is the first step forward to create the right relation between the inspectors and the companies. It applies for 500 contraventions. I think the prevention law will be fully active in less than 2 months, said Laufer, adding the draft bill is currently in Parliament. The lobby law is already debated in Parliament.

“The lobby law it’s all about transparency in central and local administration decision,” said the secretary of state, adding he made some recommendations on this law.

We cut 102 taxes, but we want to remain by the beginning of next years to 50 taxes and by the end of 2018 all taxes will be paid online, said Laufer, commenting on the government program.

The VAT was reduced from 20 percent to 19 percent and next it will be 18 percent.

The public-private partnership can be used to develop projects using foreign capital, local capital. The government is working on the sovereign fund and has an important role for the reindustrialization of Romania.

Start-up nation kicks of tomorrow. We tried to help entrepreneurs to have the chance to design their business in their own way.

“We can bring some of the 4 million Romanians from abroad,” said Laufer. “We are going to become more visible in the US market,” he added, claming that this year will be very special in the US-Romania relations.

“Infrastructure should be one of the priorities on this government,” he added.

Laufer went on to present an online platform developed by the team at InvestRomania , which lists companies with a turnover of more than EUR 10 million, which provide various services in the country. There are companies with foreign capital listed here.

Any new company looking to be posted here needs to create an account, propose the data and an admin of the platform will include the data online.

“I want to thank the multinationals that invested in Romania in the past 20 years,” said Laufer. Next year we will lower the profit tax to 10 percent and have zero tax on dividents. The secretary of state said this move could attract more companies looking at Romania as a country with favorable tax regime.

Sorin Mindrutescu, country manager, Oracle Romania, member of the board of Fondul Proprietatea: “I would encourage the Romanian administration and government to pay more attention to innovation.” “On energy, there is a lot of area for improvement,” he added.

“The future of this country will come from services – IT, medical, education,” said the executive.

IT is keeping the Romanian intelligence here, said Mindrutescu. The issue with finding workforce is a sign of a maturity of the market, said the manager on the IT sector

“What we need: education. We don’t need decreasing taxes,” said Mindrutescu, citing for instance the tax exemption for the wages of IT professionals. He said that infrastructure and the services also need improvements.

“The real pain is not government, it’s the local administration,” said the executive.

Oracle has the fifth largest subsidiary in Romania out of more than 170 states, said Mindrutescu.

I would like to see a business mindset in Romania, he added.

“The decision of investments doesn’t belong to governments,” said Mindrutescu, adding that at the end of the day this is a corporate decision. “We have to be much more visible in the eyes of American investors,” said Paun. “Last year I’ve seen tremendous demand from new companies looking to develop BPOs or centers in Romania,” she added, citing American FitBit as one of these new players.

She said there is an issue with the low mobility rate of employees across Romania. Paun said that infrastructure development is crucial for attracting new investors in Romania.

“Our product development operations in Romania have 100 contractors,” said the executive. “R&D should be encouraged in Romania,” said Iordan. From taxation perspective, we are not so bad, said Iordan on Romania. Pfizer Belgium has more than 2,000 employees. Pfizer will reach close to 450 employees in Romania. Digital market and e-health could reduce the overall costs of healthcare, said the executive.

“We are aiming to have trasparent process in healthcare,” said Iordan, saying that Romania needs a new healthcare law to reflect the real costs.

From 60 molecules in oncology, only 13 are available in Romania, said Iordan, on the way in which new innovative drugs need to get faster on the local market.

Inspectors need to understand our business model, said Iordan on the relation between the public and private sector.

AmCham Romania has almost close to 500 members. We have state-owned companies as members such as Transgaz, Romanian businessowners, American and international companies. She said that the Romanian officials in foreign embassies need to be better informed about the economic priorities of the government.

“We have concerns on the level of public debt,” said Nemoianu.

The rule of law is important for all of us, said Nemoianu.