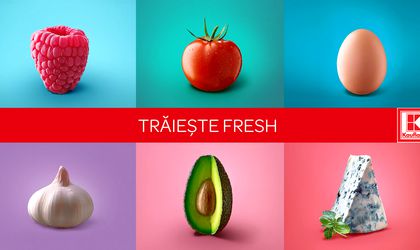 Leo Burnett Romania signs alongside Kaufland the „Live Fresh” manifesto that represents not only the new communication campaign of the retailer, but also an incentive for a new lifestyle.

“We are inviting the world to throw away the automatisms in favor of a fresh perspective that can bring them something new, a fresh thinking, and more ambition in life. To live every moment as fresh as possible, because every day plays a decisive role in our soul’s structure,” said Ada Musat, copywriter at Leo Burnett Romania.

In the same time, Kaufland Romania launched  the digital platform www.traiestefresh.ro, which focuses on the benefits of fresh foods.