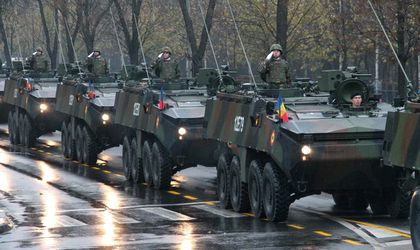 On December 1, Romanians are celebrating their National Day. On the occasion, Bucharest, Cluj, Sibiu, Timisoara, Brasov, Iasi and other cities are hosting military parades, concerts, exhibitions and other open-air events.

Over 3,000 troops will take part in the biggest military parade, organized every year in Bucharest. Held in the Square surrounding the newly-inaugurated Arch of Triumph, the parade will feature military equipment, including 50 planes. F-16 fighter aircraft will fly over the crowd in formation and on the ground, troops from partner and allied countries will join the parade. This year, Irish troops, playing drums and bagpipes will join the parade in Bucharest for the first time.

In a video message posted on his Facebook account, Romanian President Klaus Iohannis greeted all on the occasion. “December 1 is our day. Of all those who think and feel Romanian. On this special day, let’s celebrate the past and to look with optimism towards the future. The anniversary of the Great Union is about freedom, about how an ideal can be fulfilled if the whole energy of a nation is channeled towards a common goal,” the Romanian President said.

Also via a video message, Prime Minister Dacian Ciolos spoke about the importance of the Great Union and congratulated Romanians on the National Day. “They say December 1, 1918, was a miracle of history. And indeed, the enshrining of the Great Union of modern Romania, we can say was a miracle of history, but behind the miracle there were people first, people who knew how to dream, who knew how to implement consistently this ideal, in earnest. I think of politicians, men of culture, people who simply believed in this ideal and stood by it from one generation to another. And this was possible then, in 1918, because we had quality in education, values in cuture, it was possible thanks to the courage of the Romanian army, it was possible because inspired politicians,” the PM said in his video message.

Iohannis closed his message by wishing “La Multi Ani!” to all Romanians. “La Multi Ani, dear Romanians, wherever you are! La Multi Ani, Romania!,” Iohannis said on the anniversary of 98 years since the Great Union.

On 1 December 1918, Romanians celebrate the union of Transylvania, Basarabia, Bucovina, Banat, Crisana, Maramures and Satmar with the Kingdom of Romania. Romania’s National Day was set to 1 December in 1990.

On the occasion, Facebook posted a message wishing Romanians prosperity and Google welcomed Romanian users with a logo displaying a traditional wooden gate from the Maramures region, bordered by a blue, red and yellow ribbon.