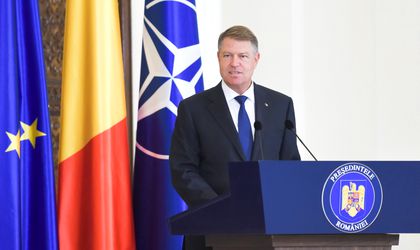 President Klaus Iohannis said that he would go to Government meetings after he found “a desire for collaboration” on the part of Prime Minister Viorica Dancila.

UPDATE: PM Viorica Dancila sent a letter to president Iohannis in response to his anouncement that he would attend upcoming government meetings in order to prevent the Executive from adopting an emergency ordinance for amnesty and pardon. Dancila’s letter says that the president will be invited to government meetings when the agenda will include “legislative projects referring to issues of national interest involving foreign policy, defence, public order”.

On the other hand, the PM wrote that “in the cases falling under the phrase ‘other situations’, when the PM decides whether to invite the president, I will send you an invitation to participate in the government meeting if I will consider your attendance necessary.”

“We have asked for the agenda (of the Government meeting). I think we have to look at things a bit ahead. We are preparing for the presidency (Council of the EU) and, even if we are ready, things will not be absolutely simple. On the other hand, I have noticed a desire for collaboration from the PM, she has repeatedly invited me to work together. So we will work together, I will go to the Government meetings,” Klaus Iohannis said in Vienna where he is participating in the Europe – Africa High Level Forum.

President Klaus Iohannis sent a letter to Prime Minister Viorica Dancila on Monday asking her to share with him the agenda of each upcoming government meeting.

“In order to exercise the prerogatives laid down in Article 87 of the Constitution, I ask you to send me the working agenda of each government meeting, and I certify that the obligation to communicate is provided by Article 39 of the Rules on Procedures at government level for the elaboration and the presentation of draft public policy documents, draft normative acts and other documents for adoption/approval, approved by Government Decision No. 561/2009,” the head of state said in a letter.

Klaus Iohannis underlined that, according to the above mentioned provisions, the agenda of the Executive meeting shall be communicated to the public authorities concerned, together with the draft public policy documents, draft normative documents or other documents, as well as the accompanying documents, at least 24 hours before the day of the government meeting.

Asked about the possibility of an emergency ordinance for amnesty and pardon, the head of state said that it would be “a very serious error for Romanians”.

Also, asked about the possibility of being accused of high treason, as Liviu Dragnea, the head of PSD suggested, Klaus Iohannis said that it is just a fantasy for certain people.

“It is a political measure that’s doomed to fail from the start, no one can make a criminal complaint against the president,” said Iohannis, who added that “there is a very complicated procedure for treason.”

The journalists also asked him about the idea of a referendum on justice. “We will certainly talk about that referendum,” said Klaus Iohannis.