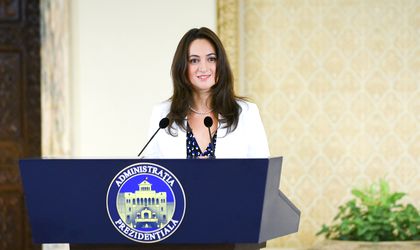 The Presidential Administration has appointed Madalina Puscalau Dobrovolschi as its new spokesperson, the journalist announced in a press conference on Wednesday evening at Cotroceni Palace.

“I am honored by this proposal, this new role that I take on starting this evening,” Puscalau Dobrovolschi said. “As a journalist, I held a belief that I want to carry further in this role too (…) – that to inform the public in a correct manner. I believe this is our mission,” Madalina Dobrovolschi said.

It took the journalist two weeks to decide whether to take the offer or not, she said. “There was a talk sometime in mid-August. It is, after all, my wish as well, to get actively involved in what public presence means, because I want to be part of Romania’s change for the better,” the new spokesperson of the Presidential Administration said.

Madalina Puscalau Dobrovolschi is 32 years old and is a graduate of the Faculty of Philosophy. For over 10 years she worked in television as a reporter, news anchor, talk-show moderator.

In November 2014, Madalina Puscalau Dobrovolschi moderated the final debate of presidential candidates Klaus Iohannis and Victor Ponta. The Romanian head of state has not had a spokesperson since April 2015, when Tatiana Niculescu-Bran stepped down from the position.