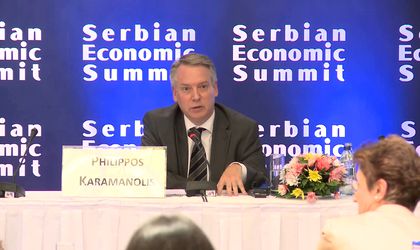 Philippos Karamanolis has been appointed the new CEO of Bancpost and country CEO for the Eurobank Group in Romania, a press release announces. Karamanolis replaces George Georgakopoulos, who has decided to take a new professional opportunity outside the group and Romania.

The new appointment will be effective from May 16th 2016, pending the necessary approvals from the Romanian regulatory authorities.

Philippos Karamanolis has had previous experience with the bank, holding the vice president post from 2006 to 2008. Since then he has been the president of the executive board of Eurobank Serbia.

He joined the Eurobank group in 2001, launching its consumer finance operations in Bulgaria. Before this Karamanolis held various positions in British Airways, London and Egnatia Bank in Greece.

He holds a BSc in Mathematics from the Aristotle University of Thessaloniki, Greece and an MSc in Management Science and Operational Research from the Warwick Business School, UK.

Bancpost in a universal bank in Romania, the local subsidiary of Greek Eurobank group. Present for 25 years in the local market, the bank has a network of 147 units and 7 corporate business centres.