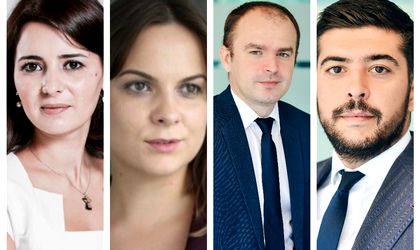 Deloitte Romania announces the promotion to the position of director of seven senior experts starting September, from business lines that have recorded significant growth in the financial year that ended in May: tax, audit and financial advisory services.

“I am glad that after a successful fiscal year, my colleagues have made one step ahead in their path to professional development. I would like to congratulate my colleagues and wish them success next to our over 600 Deloitte professionals,”  said Alexandru Reff, country managing partner Deloitte Romania.

Ramona Trusculescu has around ten years of experience in the tax practice within Deloitte, where she specialized in indirect tax. She had a secondment in the Deloitte Brussels office, where she was involved in international VAT projects for various companies. Trusculescu is currently leading the VAT compliance team. She is a graduate in Economics from Bucharest University of Economic Studies where she also is studying for a Master degree and is a member of the Romanian Chamber of Tax Consultants since 2013.

Raluca Baldea was already an experienced tax consultant when she joined the Deloitte Romania’s indirect tax department in 2013. During the past years, she has been involved in large VAT projects, both for domestic as well as multinational companies. Baldea holds a BA in Business Administration from the Bucharest University of Economic Studies, English section and is a member of the Romanian Chamber of Tax Consultants, as well as a tax expert registered at National Courts  and a chartered tax advisor.

Bogdan Barbu joined Deloitte in 2008 when the transfer pricing team had just been set up. During this time, he engaged in numerous projects of transfer pricing and international taxation. He holds a BA in International Business and a post-graduate degree in the Management of International Business, as well as a Transfer Pricing Certificate awarded by the Chartered Institute of Taxation in London and is a chartered certified tax advisor, member of the Romanian Chamber of Tax Consultants.

Radu Derscariu is a member of Deloitte’s tax department, part of the Global Employer Services team. He is specialized on expatriates’ advisory and compliance matters. Working with Deloitte since 2010, he has over ten years of professional experience focused on the companies in the energy sector. He is a chartered certified tax advisor and member of the Romanian Chamber of Tax Consultants. Derscariu holds a major in Finance and Law and two post-graduate / MA degrees in Finance and European Economy.

Andreea Gheorghe has more than 12 years of experience in financial audit with Deloitte. During this time, she was involved in large scope audit acting in various industries. She assisted in financial reports for various beneficiaries, accountancy assistance, aggregate procedures missions, as well as financial analysis missions. She was also involved in defining and implementing development programs for the audit team. Her expertise is also certified through her membership in professional associations such as ACCA, CAFR, CECCAR. Andreea Zoescu has been with Deloitte since 2008 advising both domestic and international clients, as she spent more than 18 months in Belgium. Andreea was involved in large scope audits. She coordinated the audit for several companies operating in the real estate and media industries, which she has in depth knowledge of. Andreea is a certified auditor for CAFR, CECCAR and a FCCA member. Marius Vasilescu has over 14 years of experience in finance and accountancy of which twelve spent in Big 4 companies. He joined Deloitte Romania as a manager in the valuation and modelling team part of the Financial Advisory department at the end of 2014. He currently coordinates the valuation and modelling team. As a member of the National Association of Authorized Romanian Valuers, Marius is also a member of ACCA and CECCAR. He holds a degree in accountancy and informatics, with a specialism in audit and controls, at the Bucharest University of Economic Studies.