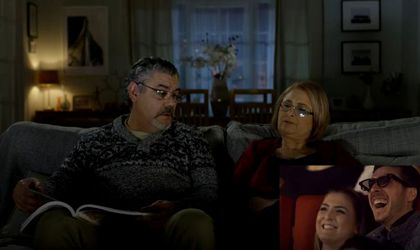 When one arrives at Grand Cinema & More, one can take advantage not only of the latest movies, but also of the experiences and unique gestures that any other cinema in Bucharest doesn’t offer. This is the thought from which started the latest campaign, signed by the advertising agency Jazz.

With the occasion of Valentine’s Day, three couples that believe that take part in a simple online contest that they entered in order to win a double movie invitation or a holiday in two at Paris, received the surprise of their lifetime, orchestrated with ingenuity, when they arrived at the cinema.

Announced on the Cinema & More Facebook page, the contest invited the users to enter a competition and share their love story, mentioning the key moments in their relationship (when they met, the first kiss, the funniest moment in their relationship, the first “I love you”, etc). Moreover, the contestants were invited to send a picture of their couple. From almost 100 entered stories, three were chosen as winners of a surprise prize for them and their half.

The couples were invited to come during the weekend at the cinema, under the pretext of winning a double invitation. What they didn’t know was that their story was a source of inspiration for a romantic short film that was going to roll on the big screen and be seen by all of the people present in the hall. The reactions of the three couples were captured by the cameramen hidden in the public and the whole story was summed up in the clip below.

„We wanted an execution with a different register that will highlight the love and their road on their relationship up to that moment. Therefore we’ve imagined a future in which the two main characters remember with love their youth. The emotion turned out from the fact that every film was personalized with details from the stories entered by the three couples,” said Simona Suman, Group Creative Director Jazz.

“Grand Cinema & More is more than a cinema. This has been our conviction ever since the launch, a thing that demonstrated that beyond trying all the time to bring to the people coming at the cinema the most awaited launches, beyond investing in the comfort and the utilities of every room, we could bring emotion and people together. And, as every feeling seems to be better seen in movies, we wondered if we can’t do the same with the love stories of the people that are coming daily to our cinema,” explained Simona Manea – Entertainment Business Unit Marketing Director.

The campaign took place during the period: 26th of January – 14th of February.