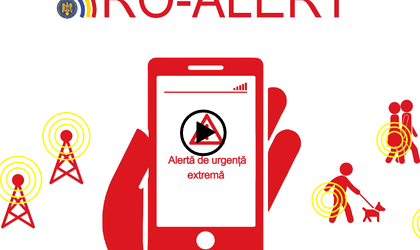 The warning system of the population in emergency situations Ro-Alert will begin testing on Friday in Bucharest and Ilfov County, the Bucharest-Ilfov Inspectorate for Emergency Situations (ISU) announced.

On Friday, between 10:00-12:00, “test” messages will be sent to users of mobile phones located in Districts 1 and 3 of the capital, but also to the cities of Otopeni and Magurele in Ilfov County.

According to ISU Bucharest-Ilfov, in order to benefit from the Ro-Alert system on the mobile device, settings can be found for each type of mobile phone, by going to the “Configuration” section of the www.ro-alert.ro platform.

The Ro-Alert system allows the broadcasting of Cell Broadcast messages to alert the population in case of emergencies. It is used in major situations where citizens’ lives and health are endangered, such as extreme weather phenomena, threatening floods, terrorist attacks or other situations that seriously threaten communities.