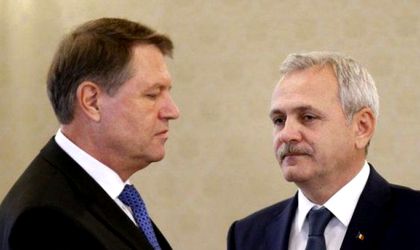 President Klaus Iohannis announced on Tuesday that he has issued the gov’t reshuffle decree, taking into account the nominations made by the ruling Social Democrat Party (PSD).

UPDATE: The decree to appoint the new ministers has been published in the Official Gazette. The following new ministers will be sworn in at the Cotroceni Palace this afternoon:

The dismissal decrees for the following ministers have also been published:

The leaders of the two chambers of Parliament, Liviu Dragnea and Calin Popescu Tariceanu, did not attend the ceremony at Cotroceni Palace. PM Viorica Dancila and several ministers were present, but vice prime minister Paul Stanescu, whose dismissal Iohannis rejected from the Development Ministry, did not attend.

“This reshuffle is a weak solution. I continue to believe that the proper solution for Romania would have been and further is the replacement of this government that has created much damage to Romania. But, until then we have this reshuffle. I agree to have a reshuffle, yet I have to consider certain things,” the president said at the Cotroceni Presidential Palace.

President Iohannis asserted that he has approved the gov’t reshuffle, and presented the ministers’ list for whom he signed the appointment decree, a list that lacks the nominations for the Regional Development and Public Administration Ministry and the Transports Ministry, respectively Ilan Laufer and Lia Olguta Vasilescu.

The President didn’t motivate his decision not to sign the decree for Vasilescu and Laufer.