Iohannis, at AmCham’s anniversary: Economic predictability is not just a slogan 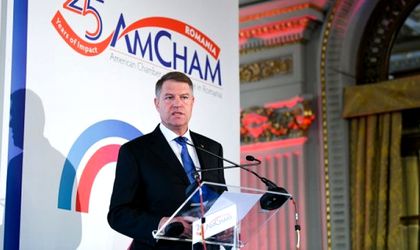 President Klaus Iohannis went to the 25th anniversary event for the American Chamber of Commerce in Romania (AmCham), where he said that the performance of the business environment cannot be, for too long, above the quality of economic policy imposed by the government, and that for this reason, economic predictability is not just a slogan that is used occasionally in seminars.

Iohannis said: “In essence, the lack of predictability also attracts a lack of sustainability of economic performances, and the business environment knows best that what is gained easily can also be lost as easily sometimes.”

He added that, in order to get a sustainable economic path, decision makers have to be capable to obtain the trust of the private sector, through measures that are well founded, transparent and predictable, and that solve issues in the economy instead of creating new, possibly even larger ones.

The president also noted that the defense industry and the energy sector in Romania have the potential of becoming, together with IT and auto industries, two essential development vectors for the Romanian economy, and invited the business sector to get involved through ideas and solutions regarding the Country Project he will open up to public debate in the following months.

Iohannis said about AmCham Romania that it is a trustworthy partner of the Romanian business sector, which “constantly contributed to the development of Romanian-American relations. The cooperation between Romanian and American business can become an authentic competitiveness vector for our economy. I strongly believe that the achievements Romania has had in the last quarter century, in areas like economic performance, political democracy and rule of law reflects a success of the excellent bilateral relations between Romania and the United States.”