Investors foresee a depreciation of Romanian Leu over the next year 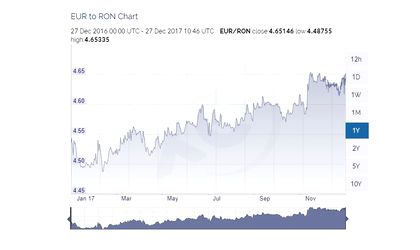 Analysts from CFA, an association of professional investors in Romania, estimate that the Romanian currency see a depreciation in the Euro/RON exchange over the next 12 months.

CFA has increased Romania’s macroeconomic trust indicator after it had been dropping for five consecutive months. The latest update gives 44.1 points to Romania, which is 0.7 points higher than the previous value.

CFA’s macroeconomic trust indicator, launched in 2011, measures the financial analysts’ anticipation of the economic activity in Romania for the following 12 months.

The anticipated rate of inflation over 12 months has been set at 3.38 percent, which is 0.62 percent higher than the previous 12-month period. All participants believe the inflation rate will increase over the next year.

The average rate of ROBOR over the next 12 months is estimated by the experts at 3.25 percent (0.62 percent higher than the previous period), and the yield of five-year sovereign bonds in RON is at 4.74 percent, with a 0.7 percent increase.