BR Exclusive: The MAN behind the Grammy- Matt Lawrence, the producer who worked with Beyonce, Lady Gaga and Adèle 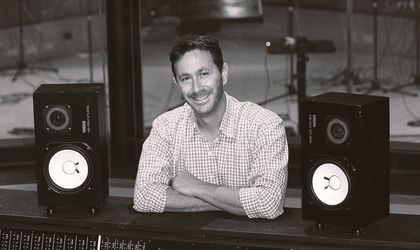 GRAMMY Award-winning producer, engineer and mixer who has worked on some of the most influential records of the past 20 years, contributing to millions of record sales worldwide, Matt Lawrence has worked with international artists such as Adele, Eric Clapton, Lady Gaga and Beyoncé. Lawrence is a speaker at Mastering the Music Business 2018 in Bucharest and exclusively talked with Business Review.

What would you say is the secret of winning a Grammy?

Chasing a Grammy is something I’d advise against setting your heart on, but if you spend a large part of your career working with the caliber of artists who are likely to be in the running you stand a good chance. Or just make sure you work solely with Bruno Mars!

When did you discover and how did you develop your passion for music?

I used to play music and make recordings to cassette with a friend when we were about 7 years old, then had a band at school at aged 13 onwards. My best friend growing up is a Jazz Pianist and teacher, we used to go busking together in the City of Bath as teenagers. I guess it’s always been there. The passion developed with my varying tastes.

What do you believe to be the main challenges of the music created in the CEE or breaking the countries’ barriers and reaching an international level?

I can only really speak of my UK experience here, but breaking the UK puts you firmly on an international map. The cost of touring and difficulty in securing gigs in the UK is a huge challenge. There are so many acts local to the UK that venues and booking agents don’t need to go out of their way to help anyone or make things easy, the onus is on the artist to make all the effort. This is hard to do remotely if you’re not around.

What pieces of advice would you give to bands and artists that want to reach an international level?

Write GREAT songs and play at an international standard. More than you’re your competition is the whole world, the bar is set very, very high. Be prepared to give away your music at the start, get it out there!

What do you know about the Romanian music scene and what impression you have about it?

This will be my first trip to Romania so I’m really excited to discover more about it and check out some Romanian artists. Very few get to play in the UK so my experience is limited here.

What are your expectations for this event?

I’m hoping to be surprised by some new acts and to see the standard and passion for music here. I wonder also what styles of music I am going to come across.

Would you say that music chose you or you chose the music? Why?

I think a little bit of both, I had such a passion I was drawn to working in studios. I thought this would perhaps be a temporary young man thing and that maybe one day I’d get a more ‘usual’ career. That just ever happened.

What separates an artist from a star?

When you meet a star you know about it. There’s something special about them, charisma, gravitas. They just shine when performing, even in the studio. You can’t create this, it’s either there or it isn’t.

What is your favourite music genre and why?

I have had such a varied experience with different genres in my many years as a Studio Engineer that I no longer have a favorite genre. If it’s a good example of that style then I’ll no doubt enjoy something about it. That said I’m still always drawn to singer/songwriters who use language in a clever way.

What about the favourite artists you worked with?

I really feel I gained a lot in my 4 years working for Van Morrison, I’m glad to have had the lessons he taught me. Does that make him a favourite?. George Michael was a real gent, and I’ve especially enjoyed the last couple of Indy-Folk bands that I produced: ‘Sinderins’  and ‘Hermitage Green’.

Do you still have one or some in your bucket list?

To be honest I’ve pretty much ticked them all off! I’d love to have made an album with Jeff Buckely though. Sad loss.

Where do you find inspiration?

From working with different Genres, there are ideas and attitudes that can be applied to other artists very successfully. There’s also nothing quite like the energy and excitement one gets working with young artists on their ascendency. It all seems so simple and effortless when you catch an artist or band at this time in their career.

What does creativity mean to you?

Having the will to do exactly as one pleases and not referencing too much what peers and others are doing around you. The confidence to trust your convictions in what you are doing and move forward in whichever direction feels right at that moment.

It is said that the music industry is one on the toughest in the world. How do you keep yourself centered?

Being excited by what you are working on and keeping a close relationship with the artist, having them around as much as possible really helps here.

What is the trick in dealing with a star’s ego?

Remembering that it’s their record. If they want to take it in a certain direction then fair enough. I will ensure I’ve pointed out potential pitfalls and implications; if they still want to carry on with their idea after that then great! I can remove my ego easily from the process so that really helps. If whatever we do makes the record better, then I’m happy. I don’t care who’s idea it was, and if it was my idea I don’t need any credit or recognition of this. It’s a team effort and the credit should belong to us all.

The funny little requests that seem pointlessly demanding are usually down to some external pressure or insecurity. Often testing the water. I have my boundaries, but I find that if I’m willing to at least try ideas I’m unsure about before saying no (or yes!) to them, then these boundaries are rarely reached.

How do you believe that technology will keep on influencing the making records’ industry? Will there still be one in 30 years’ time?

We all know that music is heavily influenced by technology and to think this might somehow change is a stretch. Who knows where that will take us. Music has been around for as long as we’ve been able to make it. That’s not going stop and as long as we are still willing to pay to see or hear it then there’ll be an industry there to support that.

What about the returning of the cassettes’ trend?

I don’t expect it to gain much traction. I think this is driven partly by craving for having a physical product and partly by a retro fashion. I think the Vinyl resurgence is enough to satisfy this appetite. It’s getting hard to find a cassette machine to play them in now!

It was for his work on Mumford & Sons ‘Babel’ album that won Matt a Grammy. Debuting at number one on both sides of the Atlantic, it has since gone triple platinum in the UK and has sold over 2.5 million copies in the US alone.

Starting out at Van Morrison’s studio in Bath, Matt worked on no less than seven of his studio albums, as well as with other artists such as Annie Lenox, Paul Weller and Stereophonics. Following a move to London’s Metropolis Studios, Matt rose through the ranks to work with acts such as U2, The Clash, The Rolling Stones, Elton John, Joe Cocker and Garbage, as well as more leftfield artists such as Bjork, DJ Shadow, Goldie and Jeff Beck.

Although Matt’s work has already contributed to many hit records internationally, he also enjoys working with new and up and coming artists from an early stage in their careers.