Interview. Joseph Quinlan: “I think Romania should adopt the mindset of the Irish” 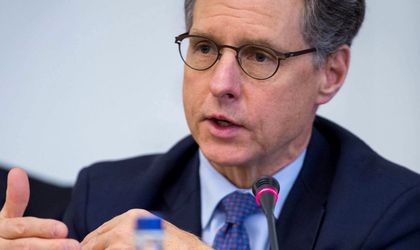 For Joseph Quinlan, an expert in the transatlantic economy and high-profile Wall Street economist/strategist, making the case for investing in Europe has become a full-time job that has taken him to several countries across the EU, to meet with key representatives of the business community. With more than USD 160 billion invested by Americans in the EU in the first three quarters of 2017, Quinlan says strategic economic relations between the EU and US will consolidate going forward.

Quinlan visited Romania in late December when he spoke at an event organized by AmCham Romania on the global economic outlook and how the local economy fits into the picture.

For starters, he believes that globalization is still alive and kicking, noting that the single digital market could unlock more growth in relations between the EU and US. On the advent of robots and automation, he says, in short, “I think technology is a job creator not a job destroyer.” For Romania to attract more investments, he argues that the country should pursue the business mindset of the Irish and talk more about its integration into the EU market.

Despite the more protectionist rhetoric coming from the administration of US president Donald Trump, the overall wealth of the EU bloc will continue to drive investments from American companies. The combined GDP of the US and EU totaled roughly 33 percent of global GDP in 2016, well above the combined output of China and India, which stands at 25 percent, writes Quinlan in Staying the course: The case for investing in Europe.

Can Romania capture investments after Brexit?

Americans have continued to invest heavily in the EU, with outflows reaching USD 220 billion in 2016. This figure is close to the profits made by US affiliates in Europe in 2016.

In Romania, total US investments exceeded EUR 1.3 billion at the end of 2016, says the National Bank of Romania. As the UK is one of the largest receivers of FDI from the US, Romania might attract a portion of these funds as Brexit negotiations continue.

“In order for Romania to capture any investment from the US, or any US investment from the UK, you have to address these micro issues, whether it’s the rule of law, transparency, the ease of doing business, competiveness, the productivity of the labor force, or an increase in the skilled labor pool. That’s key. I think the UK is going to lose investments: companies are leaving, multilateral institutions are going to Frankfurt, or Paris, or Dublin,” Quinlan told BR in an interview.

The economist pointed out that Romania’s investor profile is boosted by its geographical position, which makes it attractive for tourism, transportation, shipping and energy.

“Look at Ireland, which punches way above its weight when it attracts FDI because it’s English speaking, they’re very focused on FDI, they have the incentives, the infrastructure in place, and they put a premium on educating their talent. They are going after the high end in terms of manufacturing and services. I think Romania should adopt the mindset of the Irish,” said the expert.

The Irish also market their economic advantages as a bundle, which includes ease of doing business, availability of labor, affordable real estate and the country’s fiscal framework.

“And then their big selling point is that ‘we are attached to the EU’. Why doesn’t Romania do the same thing?” asked Quinlan.

In recent years, Romania has been trying to attract new investments by cutting taxes, and offering fiscal incentives for certain employees such as IT specialists, while implementing state aid schemes.

While lower corporate taxes sound good to businesspeople, the country also needs to have the human capital, the infrastructure and the consumers, the expert argued.

Meanwhile, a major trade deal between the EU and the US, which would also impact Romania, has been put on hold.

Negotiations over the Transatlantic Trade and Investment Partnership (TTIP) have ground to a halt, but Quinlan suggested the deal will move forward at the end of this decade, although corporations are able to operate even without such a major agreement.

“I think long term there are prospects for TTIP. It was a very aggressive agenda and program, but I think it’s more for the next decade, like 2020. You’ve got elections in the US in 2018, presidential elections in 2020, you’ve got the parliamentary elections of 2019 here. I think after those key events you can start talking, but the good news is that corporations both in the US and EU are becoming further and further embedded in each market so I don’t think we need trade agreements. It would be nice, it would accelerate certain liberalizations of markets, but companies are not waiting for the policymakers,” said the expert.

The US recorded a trade deficit of EUR 115 billion in its relations with the EU in 2016 and Quinlan says the value will narrow due to further development in the digital economy and the services sector on both sides of the Atlantic.

Skills in high demand for the future

One of the central questions for the advent of the fourth industrial revolution and the seamless presence of technology in our personal and working lives is related to the jobs of the future. Policymakers, economists and businesses are scrambling to gauge the impact of the swift implementation of Artificial Intelligence, Automation and Robotics on labor markets.

For his part, Quinlan is optimistic about the future and doesn’t believe that automation will destroy jobs.

“There will be many jobs in the future in physical therapy, software coding, private wealth management; scientists will never go out of fashion. Engineers, builders – we need people to build stuff virtually and in bricks & mortar. I would learn how to communicate, work in groups, think independently, be creative. Creativity is hugely important, and don’t be afraid to fail,” says the economist.

In the case of Romania, he says that more risk-taking is required, alongside the inclusion of more women in the labor market.

“Get girls into sciences,” said Quinlan, adding that women who set up businesses face more challenges.

“Women who start companies find it harder to raise capital. It’s just a bias. A woman who starts a company has less funding available – it’s proven – than males. But these mindsets are changing, slowly but surely,” he added.

The biggest share of female ICT specialists in 2015 was in Romania, according to Eurostat, the statistics office of the EU. The share of women in this sector stood at 27.2 percent, versus the EU average of 16.1 percent.