Interview. Iulia Suteu (Eye Connections), on the campaign raising awareness regarding Parkinson’s disease: The red tulips are the foundation of our 2015-2016 initiatives 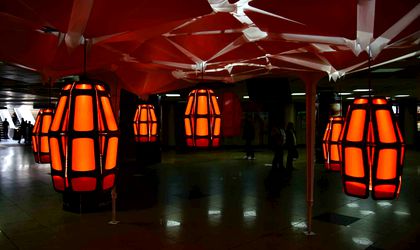 Not often do we see innovative and interactive campaigns in Bucharest that make us turn our heads around, stop and want to know more. Such an initiative was rolled out last month at the University Passage. Its main goal was to increase the awarness regarding Parkinson’s disease and the way it changes people’s lifes. BR met with Iulia Suteu, managing partner at Eye Connections agency to find out more about the insights and the ideas behind “The Garden of Hope” campaign.

How did the idea of the campaign come out? (you approached the client or it was a brief)

We started last year our cooperation with the Association of Fight Against Parkinson Disease, the association of Parkinson’s disease patients in Romania.

We had some meetings before starting to work together and in order to prepare these meeting we read a lot about Parkinson’s disease, trying to understand the challenges of the patients. I still have in mind that first impression when I met with some patients: I felt that the visible part of the condition was worse and heavier than I ever imagined. While working with the patients I found out that what the others can see is only a part of the Parkinson’s disease, the patients also developing other health issues such as cardio, stomach or depression related problems.

As these alone are not enough, the patients in Romania have to face a stigma attitude as well, because most of the people think they are under the influence of alcohol because of the symptoms.

Parkinson is mainly a condition affecting senior persons. Often the family of the patients confounds the signs of the condition with the old age signs.

For these reasons we named our campaign „The Garden of Hope” meaning that the support of the people around helps the patients to find the power to hope and fight.

“Garden of Hope” aims to increase Parkinson’s disease awareness, the addressability to the neurologist and to wash away the stigma.

How did you decide upon this concept and how hard was to implement it or not?

The red tulips are the foundation of our 2016 and 2015 campaigns. In 1985 a Dutch horticulturist suffering from Parkinson’s disease had created a special red and white tulip that become in 2005 the international symbol.

We wanted to create a campaign that fits the Association: a mix of fragility with power, of tenderness with determination.

On the other hand April is the International Month of Fight against Parkinson’s disease, but in Romania the month is associated with the Palm Sunday and with the Easter. We wanted to draw the public attention to our key messages in a way that is both creative and creates synergies with the context.

Both campaigns were a challenge in terms of doing the best and even more with the resources allocated and in replacing an important part of the financial implications with the enthusiasm of our team and of the people around us. Last year we created the first „Flower Carpet” in Romania that was exposed for three days in Old Town Center.

More than 30,000 people visited it. 3,000 supporting messages were written by the passers-by. The project was a challenge in finding 15,000 flowers in exactly the same size, shape and shade.

This year we have implemented an interactive tulips installation. It was exposed for one week (April 18-24) at the University Passage, one of the most busy passers-by areas in Bucharest.

It was the first interactive installation in Romania dedicated for a better knowledge and recognition of a condition.

A team of ten people – architects, graphic designers, IT specialists developed the installation from design to production.

Is it just this activation or part of a bigger campaign? If the latter, what are the other activities you are doing?

The installation has been the core of our campaign.

A press conference with journalists, bloggers, specialists and patients was organized before the launch of the installation.

We developed together with the Romanian Society of Neurology, the main partner of the „Garden of Hope” project, www.boalaparkinson.ro a web site dedicated to the patients and their families. The site will be full content by end of May and its intention is to help the patients from the early stages to the last ones: symptoms, life advice – diet, kineto, other helpful activities, tips (e.g. How to prepare a journal for the visit at the doctor).

Last year we organized meetings for Parkinson’s disease with the seniors in Bucharest. The events were successful and we would like to continue them. With the help of an artistic act and involving pantomime actors we tried to show the audience the Parkinson’s disease symptoms.

In parallel, the Association has a very efficient project called the „Scholl of Patients” were they can find out more from the specialists, about living with the condition.

Tell us more about the creative concept behind this initiative

One of the most well-known symptoms of Parkinson’s disease, the uncontrollable tremor, was translated in an artistic way through the flashing light and the vibration of the tulips. The tulips are made of metal, the perfect material for symbolizing a condition of the nervous system that brings so many restraints to the patients, while the ceiling symbolizes the micro – structures of the nervous system.

Each of the seven tulips in the installation has a tremor played physically (vibration) and through light. When touched, the shaking stops and the tulips emit a sound message – “You stopped the tremor and gave hope to the patients. Thank you”

Do you think about doing the same activation in other cities in Romania? Why?

Our plan is to exhibit the installation in other cities in Romania and we have started the discussions for this.

What are you main expectations for this campaign, during and after it?

Our major goals are to increase the Parkinson’s disease awareness and the addressability to the neurologist. 30,000 persons interacted with the installation and other 100,000 saw it and found info from the posters and fliers offered by our volunteers.

How do you think the PR industry in Romania is changing and how is the development of the digital involved in this process? How have those changes affected your agency?

The digital is part of the evolution and I consider normal to have it as a core of each campaign. When speaking about Parkinson’s disease you may believe that digital is not one of our main channels. We managed to create a strong and active community on the Facebook account made especially by patients.