Interview. Carmen Ivanov: The story of Dictie.ro, a diction app for Gen Z 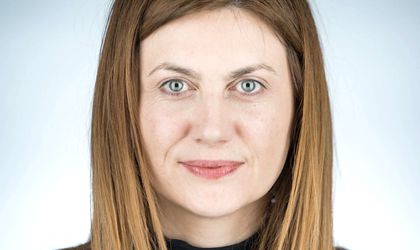 Carmen Ivanov, a well-known radio anchorperson and trainer, launched the first Romanian mobile diction app, an extension of the website of the same name. BR dove deeper to find out more about the idea and the process behind it.

When did your passion for diction first start?

It came along with my passion for radio, because my first job was in the radio business. It’s the place where, for the first time, I heard my voice in headsets and I realized that, besides a good voice, impeccable diction from pronunciation to intonation was also extremely important.

You are the first person in the Romanian media to place so much importance on diction. How have you paved the road for others?

Once I started to teach diction at the Center for Independent Journalism and the Television School, I found that there was a real need for diction training. There are hundreds of classes for public speaking out there, but very few of them offer diction in such a way as to help one speak in public. Why me and not somebody else? This is a question I never asked myself before, but I realized that one day someone would write, for example, the first diction manual in Romania. Or create the first interactive diction audiobook, the one with a very hard to pronounce name: “Sase sasi in sase saci” (Six Saxons of Transylvania in six bags)

How did you succeed in making the diction “sexy” for the crowd?

The majority of those who come to diction courses want to speak better, either in public, or at the radio or TV. Anybody wants to enjoy the five minutes of celebrity, or maybe even more minutes, if they get a permanent job in a mass-media institution. That means that in order to reach the celebrity status first of all you have to be perfect when it comes to diction. It’s absolutely necessary to pass through a diction training before. Moreover, my methods of teaching are interactive and based on the experiential learning, therefore is kind of impossible to get bored at my classes.

What made you decide to create an app for diction?

The dicție.ro app is a communication channel created especially with the younger generation in mind. Generation Z, those born after 1995, prefers to get informed with the help of the internet, apps and social media. I decided that diction in Romanian needs to be accessible also to those who spend all their time with their mobile phones in their hands.

What was the criteria for choosing the app’s developers?

I was looking for a young team, but with experience in mobile apps, a team that would understand exactly what I wanted a person to receive the second they opened the dictie.ro app. In only half an hour, the guys from Kappsule Studios succeeded in delivering what we wanted, and even more. We can say that the diction app in Romanian is the most complex diction app on the market because similar apps in other languages do not offer as many functions as ours. The app is available for free both in the AppStore and Google Play.

Who is your target and how do you intend to reach it?

My target was 10,000 downloads in the first month. Fortunately, this number was reached just two days after the official launch.

I would love every Romanian with a smartphone to have the dictie.ro app installed and to use it. I made a lot of media partnerships to promote the app, as it is free and useful for those that want to practice their diction or take phonetic, grammar and correct speaking quizzes.

At the moment, we are working on an update that will enrich the app’s content and bring new features.

How much time did it take to create and what was the initial investment?

I invested almost EUR 5,000 of my own funds. The development – from idea to the launch – took almost seven months. The actual development, almost six months.

Tell us more about how you conceived it.

The app is structured on several sections, among which:

It contains over 700 questions with the most frequent mistakes made by the Romanians, words pronunciation difficulties and complicated constructions in Romanian.

This section may be named also “in your pocket diction”. Here are a multitude of diction exercises written by the team dictie.ro that have the role of opening the users’ tongues. At the same time, the exercises are recorded audio by our trainers so that the people that want to improve their diction have a proper model to follow.

One of the most important app’s functions is addressed to those whom want to find out from an authorized trainer how they are doing with their diction. The users read out loud a text written by the specialists dictie.ro, the app automatically records in the shortest period of time a complete feedback regarding the pronunciation, the voice, the rhythm and the eventual speaking errors of the one that opted for this function.

In this section appear the newest articles in the field, either we are talking about frequent speaking mistakes, speaking at the microphone techniques, public speaking or advices about pronunciation or protecting the voice.

What are your business expectations when it comes to the app?

The number that I want to reach when it comes to downloads is 15-20 thousands a month, because I am going on the idea that this app is a good and easy communication channel with the ones interested to talk more correctly and clearer the Romanian language.

While it concerns the amount of money, we don’t have any type of expectations, because the app is free.

What are the main diction problems for the Romanians?

The fact that they are in a hurry to speak, that they swallow syllables, deforming the words and that they don’t open the mouth big enough in order to correctly pronounce the words.

80% of the students that come to me have only a problem: they don’t open enough the mouth. Usually, due to laziness. And, due to this, the sounds come out very strange, distorted, the words don’t come out full anymore, but disarticulated or unarticulated, most of the times mixed up. They say „l” instead of „r” and reverse.

How long does it take to learn a proper diction for TV or radio and why?

At least six months because you need to create some new reflexes. It depends very much on how much does he work individually, how much time one gives to the work. Four-five months, in the conditions which the person is working daily.

If the voice has some qualities and needs only some work on the pronunciation and intonation side, three months are enough. But, if we take in account an average case, of a person that has both a voice and a pronunciation unworked, for sure are necessary four-five months of preparing, at least. It doesn’t depend only on the teacher, but also on the one trying to improve his diction, because the diction gets rusty. You don’t practice, you will for sure not progress and you won’t create reflexes.

You have a website, two books and now an app dedicated to diction. What next?

This year I have in work two new diction manuals and a new audiobook. I hope that until the end of the year I will succeed in launching one of the manuals that I am working on. Sase sasi in sase saci, diction manual for adults will benefit from a continuation (volume 2), and Strafurnica (The Stra-swarm – diction manual for children will receive a third part, in which the book heroes will reach the space. The children book is in fact an adventure novel, that read out load becomes a true diction manual.

A radio and TV journalist with over 10,000 microphone hours, she currently produces and presents the show IT Republic for Radio Gold FM. Ivanov is a diction trainer offering specialized diction, commercial voiceover and public speaking courses, and the only author of a diction manual and mobile app in Romania.