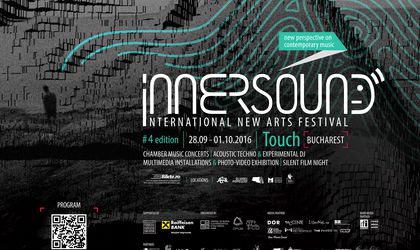 The fourth edition of Innersound New Arts Festival will take place in Bucharest between September 28 and October 1. Over 60 artists from 8 countries will be present on the stages from Elvira Popescu Cinema, The Ark, ARCUB Gabroveni, the National University of Music Bucharest and the George Enescu National Museum.

The concept of this edition is Touch, emphasizing the art that generates innovation in any domain. The theme of the festival challenges the audience to reflect upon touch: as a frontier between technology and senses, as a meeting point for artist and spectator, as a first real step from feeling to matter.

The first day of the festival, taking place on September 28 at The Ark, at 19:30, brings on stage the members of the Ad Libitum String Quartet : Alexandru Tomescu – Ist violin, Serban Mereuta- IInd violin, Bogdan Bisoc – viola and Filip Papa- cello. They will interpret the winning composition from the InnerSound competition, the piece written by young musician Sebastian Androne.

The second day of the festival will take place at the Elvira Popescu Cinema venue starting at 18:30, and it is dedicated to the Silent Film Night, where there will be a screening of 10 short contemporary silent, narrative, experimental and animation films that are competing for the InnerSound trophy.

The special guest of the event is David OReilly, an Irish artist living in Los Angeles, known for his internationally awarded animations, video games and digital art. OReilly is also the artist signing the special effects for the film ‘Her’, directed by Spike Jonze, starring Joaquin Phoenix.

The festival will close on October 1 with an electro-contemporary night at the Ark. From 19.30, accordion player Ghenadie Rotari, the Dutch ensemble Project 128 and DJ Lukatoyboy will combine contemporary classical music with electronic beats, techno-acoustic and experimental DJ.

The price of tickets for the first day of festival is RON 35 , for the second day it’s RON 25 and for the last two days is RON 30 each. A season ticket, for all four festival days are available at the price of RON 75.