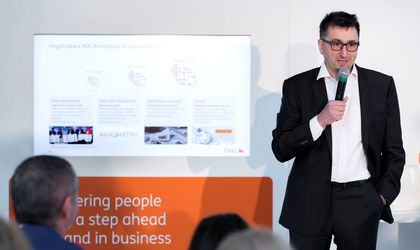 ING recorded a RON 120 million gross profit in the first semester of 2017, RON 22 million more year-on-year, on the back of a substantial revenue increase (RON 52 million) and a constant level of costs.

The credit portfolio went up to RON 18.5 billion at the end of March 2017, representing a 28 percent increase over the past 12 months. ING’s share on the lending market went up to 8 percent, from 6.3 percent in March 2016.

Also in the past 12 months, ING attracted over 125,000 new active clients, representing a 14 percent increase compared to the end of March 2016.

Total revenues increased by 19 percent, to RON 323 million, due to the business growth and of the number of active clients. Operational costs went up to RON 176 million, 15 percent more year-on-year, on the back of business growth as well as of investments în the IT infrastructure, of costs with the new employees and of regulatory costs.

Risk costs went up to RON 27 million, from RON 19 million reported in the first three months of 2016, following an increase in the volume of credits. The rate of non-performing loans remained under market level and, year-on-year, decreased by 0.9 percent, to 3.7 percent. Gross profit stood at RON 120 million, RON 22 million more compared to the end of March, due to an increase in revenues (RON 52 million), but also of a good control of operational and risk costs.

The loans portfolio went up to RON 18.5 billion at the end of March 2017, representing a 28 percent increase throughout the past 12 months. The main factors of growth were loans for individuals and large companies. In the case of loans for individuals, the positive trend was felt in the first three months of 2017, bringing ING to a loans market share of 8 percent, from 6.3 percent in March 2016.

„The beginning of 2017 continued the organic growth ING reported in the past years, with a market share that is constantly growing both on the loans sector, as well as of deposits, with a balanced portfolio and an increased attention to the development of digitals ervices and innovation. Our objective remains that to build the digital bank of the future,” Michal Szczurek, ING Bank Romania CEO said.