Ilan Laufer: Romania is “the most pro-American country in the EU”, record bilateral trade volumes reached in 2017 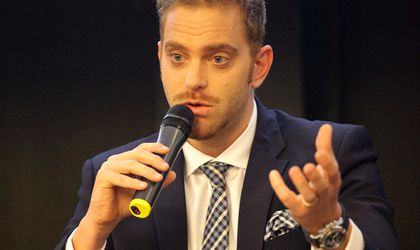 Ilan Laufer, the Romanian Minister for the Business Environment, Commerce and Entrepreneurship and US Commerce Secretary Wilbur Ross took part in a meeting on the subject of the new historical high in the commercial trade between Romania and the United States, as well as the stepping-up of the bilateral cooperation between the two countries. The Romanian Ambassador to the United States, George Maior, also attended the meeting.

The Ministry states that Romania is the best example from Eastern and Central Europe of the commitment shown to the US regarding transatlantic security. Minister Laufer said: “we are the most pro-American country in the EU and we support the United States’ leadership and important status in the world”.

Due to the fact that Romania has allocated 2 percent of GDP for Defense and directed over 40 percent of the defense budget for the acquisition of cutting-edge military technology, the Romanian-American economic relationship is going through its most important historical moment in 2017, as by the end of this year the commercial trades between the two countries will exceed USD 3 billion.

Some examples of Romania’s collaboration with the US on military technology include the USD 4 billion Patriot system acquisition, the future HIMARS purchase worth USD 1.25 billion, the collaboration on the F16 airplanes, as well as the cooperation with Bell Helicopter and General Dynamics.

As a result of these decisions, Romania has been an example in the region regarding cooperation with American companies for the development of strategic capacity, in sectors such as defense, cyber security, energy and IT.

Laufer stated: “We’ve asked Secretary Wilbur Ross to support Romania in being granted the ‘dependable undertaking status’, which will allow payments to the USA to be made in instalments and give Romania the status of a serious and consistent partner”. Ross also assured Laufer that the US will support Romania’s intention to join the OECD.

In this context, minister Laufer thanked Secretary Ross for the fact that this year Bucharest hosted the most important event for the support of American exports, “Trade Winds”, where over 100 American companies were present, and the results were extremely positive for bilateral trade.

In the first 10 months of this year, US companies’ exports grew by 30 percent, and commercial trades grew by 17.5 percent from 2016, reaching USD 2.6 billion.

During the meeting, Laufer presented data showing that the US is the sixth largest foreign investor in Romania, with a total of USD 8.4 billion invested and a presence of over 3,500 American companies. The US is, in fact, Romania’s largest non-EU investor.

Wilbur Ross congratulated minister Laufer for his involvement in organising the “Trade Winds” event in Bucharest, at the same time thanking him for the successful promotion of the trade relationship in Romania, as well as for the presence of the largest delegation of Romanian companies which the minister led at Select USA.

As a result of this presence, several Romanian companies have begun the implementation of new projects in the US, the most relevant being the Alexandrion investment in New York state, worth over USD 100 million.

According to Laufer, Secretary Ross will also facilitate a Washington visit of PM Mihai Tudose in the near future, during which he will meet US VP Mike Pence, to continue the consolidation of the Romanian-American relationship.

Secretary Ross also expressed his wish to attend the opening of Romania’s Miami Consulate at the beginning of next year, as well as the inauguration of the first Nissa store in Miami, which comes as a result of the brand’s presence at the Select USA event.