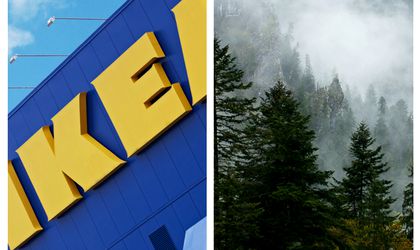 Swedish IKEA Group has made another investment in the local forestry sector and says that its plans might include further acquisitions on the local market.

The furniture retailer has taken over 12,800 hectares of forests in Iasi and Neamt counties through IRI Investments, the subsidiary that controls its portfolio of forests in the country. The company did not mention who was the seller.

„We still have things to improve, but our plans here are for long time, so we have trust and we are prepared to work hard for it” said Constantin Moisa, regional manager IRI Forest Management, according to a statement.

Following the latest acquisition, IKEA controls 46,700 hectares of forests in Romania. IRI Forest Management said that it had finished its first afforestation campaign in February, planting over 1 milion seedlings in 10 counties across Romania.

The company added that it had started the forest exploitation with contractors that met its standards.

From the acquisition of the property up to now, the contractors harvested 55,000 cubic meters in total, meaning less than half of the quantity allowed by law for this period. Around 6 percent of the total forest area, or 2,000 hectares, are excluded from commercial logging.

IKEA currently has 52 employees in the forest operations in Romania, including forest rangers, district coordinators and adminsitrative personnel.

“We implemented many new procedures in the company, once with the start of the preparation for the audit. But besides the consistent requirements related to biodiversity protection in the FSC standard, we also decided to apply two additional measures. First, we developed a standard for works made in natural protected areas, which encourages a closer involvment of the areas’ managers in the forest management process. Secondly, all works have been suspended in the areas in our portfolio identified in the PIN MATRA project, until the moment authorities will finalyze the procedure for the evaluation and protection of the virgin forests,” said Florin Stoican, sustainability and conformity manager.

IRI Investments BV, the owner of forests in Romania and in the Baltic States , said it was looking for business opportunities in other coutries and that future investments are considered in the local market.

Aside from the retail and forestry operations, IKEA is also active in the local real estate sector through Vastint.