How Vienna is steaming ahead on development under smart cities concept 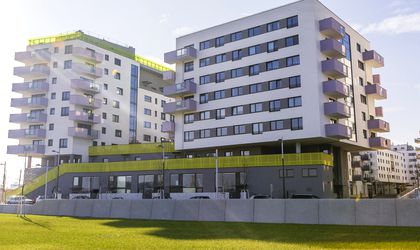 Walking through Aspern, a district of Vienna, might seem like a regular neighborhood stroll, but some of the buildings here are fitted with sensors monitoring everything from room temperature to water consumption and air quality, as part of a massive EUR 5.5 billion development program.

When you see children playing in the park and adults going shopping or running, you wouldn’t imagine how much tech is present here with the ultimate goal of making urban areas around the globe make better use of energy, which would also bring cleaner air and lower costs for inhabitants.

It’s all part of a complex research project developed in public-private partnership called Aspern Smart City Research. The initiative, which has a five-year budget of EUR 38.5 million, is backed by technology conglomerate Siemens, which has the biggest stake in this project of 44.1 percent, together with the companies providing energy to the Austrian capital, Vienna Business Agency and the property developer Wien 3420 Holding. Some 2 million pieces of data are generated every day in Aspern and the information will help the consortium to come up with innovative solutions for the production of energy in cities.

The Austrians started to build this city from scratch in 2008, on the grounds of a former airport, and it will cover 2.4 square kilometers in total.

The first people moved here in 2015, two years after the metro line linking the district to the rest of Vienna was put into operation.

Read how Romania can have smart cities

In the development stage, the construction firms have focused on sustainability, while keeping costs down. For instance, an artificial lake was constructed in one of the outskirts of the district, and the concrete dug up from there was used to build the apartments. This was a measure that saved both money and time, because the trucks didn’t have to bring the material from another part of the city.

The construction phase of the project runs through to 2028 and the whole development will cost EUR 5.5 billion.

Who is moving in and how is energy put to work?

The developers are saying that ultimately, they want Aspern to be an urban area where everybody finds a home and job, be it individuals or families, on higher or lower incomes, as well as with different educational backgrounds. And the way in which the residential part of the project is handled reflects this principle.

The mixed-usage project under development in Aspern will accommodate large office buildings, aside from the apartments and retail areas. A new train station is planned that will be sited on the rail links between Bratislava and Vienna.

The surface areas of the flats range from 25 to 160 sqm and there are subsidized rent schemes available of up to EUR 10 per sqm. For those looking to buy an apartment, prices range from EUR 2,500 to EUR 3,000 per sqm.

In terms of energy production, some of the buildings are fitted with solar panels and have heating pumps. However, Aspern is linked to the central district heating system, because the ultimate goal of the research project is to come up with solutions that can be applied in the rest of Vienna, to the current residential stock. In addition, the buildings are fitted with batteries, for the storage of energy.

How will the research help inhabitants and municipalities?

The researchers are currently collecting data and running different scenarios in order to develop new ideas under smart concepts, which include the user, the buildings and the markets.

At present, the research consortium is working with a massive pool of data that should lay the groundwork for future services provided by utility firms such as flexible energy tariffs that would also take into account prosumers – consumers that will also generate their own electricity and feed it into the smart grids.

The energy markets are also set to benefit from this research. For instance, the production of energy will become more efficient based on weather conditions that are verified in real time.

Right now, the research is being carried out based on data provided from three buildings. Student lodgings are fitted with solar panels, batteries and electrical heating cartridges. In addition, 213 apartments are equipped with seven different heat pumps, hybrid panels for solar-thermal generation and PV, geothermal heat accumulators, hot water accumulators, batteries and apartment automation systems. Similar systems are used in the school building with kindergarten.

Similar to what’s happening in Aspern, authorities in Romania are trying to implement smart cities principles in an Alba Iulia pilot project with the help of private companies. The town will be included in a research study carried out by Siemens in several cities across Europe. Researchers will look at ways to improve the traffic and energy consumption in the city. 5G technology is also set to be tested here.

The mayor of Alba Iulia Mircea Hava suggested that getting the label of smart city will attract more tourists. Some 7,000 people visited Aspern last year, more than the current number of inhabitants.

Although a lot is being said about smart cities in Romania, the pace of implementation of such projects has been rather slow. For instance, Bucharest got a smart traffic system that broke down because a cable was severed during construction works on a road. This spring, a pilot project under the smart cities concept was rolled out in a Bucharest park.

But before putting in place the new infrastructure that can accommodate, for instance, the Internet of Things (IoT), authorities should actually look at the PPP legislation, which investors say is not working properly.

The structure of Aspern Smart City Research by stake

20,000 – the total number of inhabitants that can be accommodated in Aspern