Holsten and Tempo to launch a new image campaign 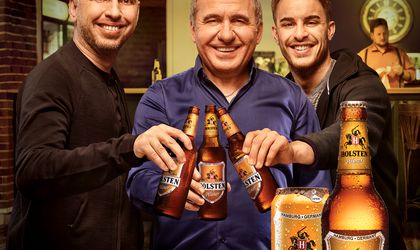 A new Holsten image campaign brings back the story of the knights, with a new twist. “The no. 1 German beer in Romania” supports the modern knight idea with the help of new endorsers: King Hagi and his students, FC Viitorul teammates.

Fairness, altruism, courage, sacrifice – these are the values that led to the success of FC Viitorul, sponsored by Holsten since 2017. Moreover, those modern knights already have a King, none other
than the legendary Gheorghe Hagi, a model of authentic chivalry on and off the field. The image campaign has several executions, each highlighting Holsten values in a fun and inspirational way.

“The symbiosis between King Hagi and Holsten helped us to easily create TV ads inspired by traditional values of medieval knights. That’s because they have not changed that much in the last 400+ years. A football team with their king and their staff closely resemble after all a bunch of modern knights led by their king. The staff we worked with for the commercials experienced plenty of  pressure, yet everyone behaved exemplary. The commercials have been filmed in record time, with assistance from an experimented director such as Radu Muntean. We thank King Hagi and his knights, all the production team and the Client as well for the trust and support shown to us,” said Razvan Mitoiu, creative director Tempo Advertising.

The commercials are already on, broadcasted by the main TV stations, and the campaign also has a Digital and Trade side.