Highlights: Key ministers that the private sector should watch in Grindeanu Government 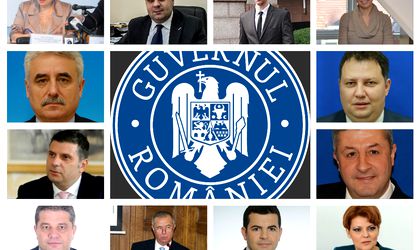 The decisions of certain ministries have proven to be critical for the activity of the business environment in Romania in the past years so the private sector has to be aware of the people that will shape the policy in fields such as finance, energy, health and transport.

Some of the ministers that have been proposed on Tuesday for key portfolios have had previous experience in public sector positions. Here is a brief presentation of people to watch in the new government, from the point of view of Business Review magazine. as been working in the public sector for close to 30 years. She had a 6-month stint as minister of Development in the Government led by former PM Victor Ponta. According to media reports, Shhaideh is a close ally of Liviu Dragnea, the head of the SocialDemocratic Party (PSD).

In late December, Shhaideh was rejected for the position of PM-designate by president Klaus Iohannis, who did not state publicly the reason for turning her down as candidate for the head of government. She is a graduate of the Faculty of Economic Studies and has a Master’s degree in business project management. Shhaideh pursued additional training courses in the United States of America, focusing on administration and project management.

Mihaela Virginia Toader, the proposed delegate minister of EU funds, has been working in government structures since 2003. She was counselor for European affairs within  the General Secretary of the Government between 2003 and 2008 and director of the Public Policy Department within the same organization in the next five years. Starting 2013, she has worked as director in the analysis and evaluation department of the Ministry of European Funds. She holds a law degree from Nicolae Titulescu University and got a Master’s diploma in the European Public Space from the National School of Political and Administration Studies in Bucharest (SNSPA).

Daniel Constantin, the proposed minister of Environment, worked in the past as ministe r of Agriculture and recently got a second mandate as MP.

He is co-head of the Alliance of Liberals and Democrats (ALDE), the political ally of the Social Democratic Party (PSD). Constantin has extensive experience in the field of EU funds management, especially in the agriculture field. He is a graduate of the Zootechnics Faculty and has a Master’s degree in management.

Alexandru Petrescu, the proposed minister of Economy, is the current general director of Posta Romana, the state- owned postal operator. He was selected by a consortium of private recruiters for the role of president of the administration board of railway company CFR Calatori, as part of the government’s initiative to appoint private sector specialists in state-owned companies.

He has held management positions at Posta Romana since 2012. He previously worked as  board member at MasterCard Customer Advisory Forum and was Director of BD, APS Ro at Advanced Payment Solutions. Petrescu is a business administration graduate of the Cardiff University and of the University of Wales, Business School. He is currently pursuing a PhD in Telecom & Financial Services in Postal Administration at the Lucian Blaga University in Sibiu, according to his LinkedIn Profile.

Pavel Nastase, the proposed minister of Education, has been rector of the University of Economic Studies (ASE) between 2012-2014. He has a PhD in economic calculus and economic cybernetics.

Toma-Florin Petcu, the proposed minister of Energy, has held public sector roles at the level of Gi urgiu county. He was president of the National Agency for Environment Protection between December 2015 and May 2016.

Petcu is a graduate of the Technical Constructions University, specialized in hydrotechnical constructions, and holds a Master’s degree from the University of Economic Studies (ASE). He was elected as MP in the December 11 elections and he is a member of ALDE party. Viorel Stefan, the proposed minister of Finance, is head of the budget and finance committee at the Chamber of Deputies.

He has been MP since 1996 and was close to becoming minister of Finance in 2015, after Darius Valcov stepped down, being accused of corruption. Stefan holds a PhD in Economy and he has been a member of PSD since 1993.

Florin Iordache, the proposed minister of Justice, has just been elected for his fifth He has both engineering and law degrees and completed several courses, including a Master’s program, in public administration. Iordache was part of the group of MPs that proposed controversial changes to the legal framework, according to HotNews.ro.

Augustin Jianu, the proposed minister of Communication, has been the general director of National Computer Security Incidents Response Team, CERT-RO since May 2014.

He previously worked as counselor at the Cabinet of the minister of Communication.

He is a graduate of Faculty of Automation and Computers and holds a Master’s degree in business management. He worked for around three years as a software developer.

Florian Bodog, the proposed minister of Health, has worked as manager of the County Hospit al Oradea between 2009 and 2010 and held management positions within the Ministry of Health.

He held management positions at the Faculty of Medicine and Pharmacy within the University of Oradea.

Bodog is a doctor in medical sciences and was recently elected as MP for a second mandate. proposed minister of Transports, is vice president of the transports and infrastructure committee within the Chamber of Deputies.

He briefly held the position of secretary of state at the Ministry of Transports between October 2015 and May 2016.

Lia Olguta Vasilescu, the proposed minister of Labor, has been mayor of Craiova since 2012. She was put on trial by anti-graft prosecutors in a case regarding the financing of her political campaign almost five years ago. She holds a PhD in sociology.