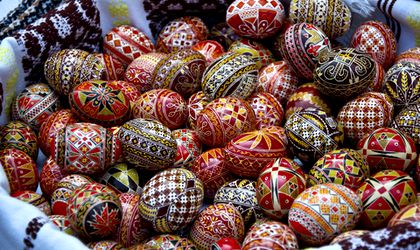 The biggest holiday of Christians, the Resurrection of Jesus, represents for Romanians the occasion to live a Holy joy and to celebrate it in the community. Out of the Romanians who choose to travel this Easter mini-holiday, the top preference is Bucovina (33 percent), according to the hotel booking platform HotelGuru.ro.

Bucovina region is known for its Easter traditions and the charm of monasteries full of history, which complete the Romanians’ tradition from Bucovina. Every detail of Easter traditions, from the handcrafting, decorations of eggs, the braiding bread, to the habits from the Easter night, reflects the history and the cultural legacy, passed over from one generation to another.

The most popular tradition is the painting and decoration of eggs. Bucovina is a region with a traditional technique for eggs decoration. Some who still keep the tradition alive, use an instrument called “chisita” (a sharp peak made of sheet-metal, fixed on the tip of flat stick). Nowadays is used also the nib. The handicraft of eggs decoration is related to the embroidery. The Easter night’s  traditions and the decorations that are found on the national costumes transform a common thing into a beautiful art. The handicraft in passed from generation to generation.

The handicraft is observed in the harmony of the colors, in the gentleness of the models passed from one generation to another. The eggs are painted in three or four colors, usually taking into account the symbol behind it. The chromatic of the painted eggs makes the difference between the main areas where this handicraft is done.

The eggs should be decorated on the Good Thursday or the Holy Saturday and are brought in the Easter night or morning to be blessed.

The Easter ceremony begins the night before, when at the midnight people gather at the church to celebrate the Jesus’ Resurrection, to take part in the Easter Mass and take the Holy light brought from the Holy Grave from Jerusalem.

Young and old people gather at the monasteries in Bucovina to get the Holy Light. Some women even dress in the national costume, which differentiates through the black color embroidery.

The tradition says that each member of the family needs to have for Easter at least one new item of clothing, usually the man’s traditional shirts were the most complex and their work was kept secret in order for the model not to be stolen.

Also, in the Easter night there is the habit of lighting the “vigil fires”. On hills are lighted fires that burn all night. Villagers gather around them telling stories from Jesus’ live, while boys jump over the fire to banish the bad spirits.

In some parts of Bucovina there is a habit of switching on the lights in all houses all night to light all the household, to celebrate the Jesus’ Resurrection. Starting this moment, the usual salute is “Christ is risen!”.

Thus, for all those who want to feel the Easter atmosphere, Bucovina is the perfect choice. Here you can take part in all the traditions that are still passed from generation to generation and you can feel the light in your houses and in your souls.