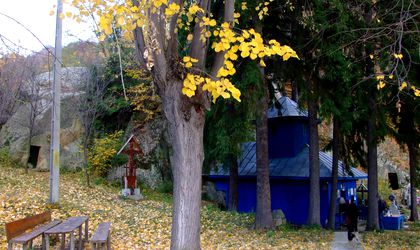 Romania is famous abroad mainly for Dracula legend, but this is only one of the country’s countless legends. Buzau mountains hide legends in their beautiful views, attracting each year close to 33,000 visitors with unique sites (Amber Museum and rupestral church Alunis). Amber Museum alone is visited by around 15,000 persons per year, while the rupestral establishments in Alunis are seen by around 18,000 persons, as these are the most accessible in the region, according to Diana Gavrila, the guide from Land of Luana. Moreover, there are thousands of visitors who choose to discover the entire Land of Luana path in a 8-hour trek.

Around Colti, Bozioru and Braesti localities in the Land of Luana there are tens of rupestral establishments inhabited since old times, as well as natural monuments around which were built  fairytales and legends, as well as many stories about human vanishings and paranormal phenomena.

Buzau mountains are metaphorically named Land of Luana, due to a legend passed over from generation to generation via the peasants in the region, says Gavrila.

Seniors say that once upon a time, in Buzau mountains there was an old and wise king, Luana, whose fortresses touched the sky. The defenders of the fortresses were brave and fought for justice, the king was healing their wounds with charmed waters from the Spring Wells’ Valley.

The Amber Museum in Colti comprises a collection of amber unique in the world, due to their texture, variety and colors, with a special energy, according to Gavrila. The amber from Colti is very old compared with the ones from the rest of the world. It was part of the Paris exhibition in 1867 and it was awarded with the golden medal.

Moreover, in 1935 a team of specialists went in Colti and discovered that the most valuable amber is there, according to the guide. The rupestral church Alunis was attested in documents in 1351. It has been the monks’ skete until the 19th century and since then, it has been the church of Alunis village. According to Gavrila, the Alunis assembly is the widest assembly of rupestral establishments- a church and several houses. The place is functional.

“There are proofs that the monks have lived there since the 4th  century and stopped the activity at the secularization, but it took over the activity a year later (1864), when the church has become the village’s church and it’s the oldest church of a kind in Romania, which still functions. It is the most complete place in the area,”  says Gavrila.

This area is special through the numerous cliffs and stones with old symbols and signs, still little analyzed. Also, there have been discovered intriguing entries in the ground or places where people confronted with strange phenomena, such as human vanishings, only to reappear after a while.

Other special areas are the rupestral establishments from Nucu-Alunis, with 29 houses, are at 6 km from the center of Colti, near Colti-Bozioru-Braesti villages.

The road to the rupestral assembly Nucu is a covered area, with a microclimate comprising a Mediterranean flora and fauna, according to Gavrila. Last, but not least there is the Cave’s Bottom, which is unique at global level, according to Gavrila, due to the inscriptions discovered inside since the Bronze Area and Neolithic. There are sacred engravings. The specialists say that in the past were hidden the young elite of worriers.