heRObotics team in the final of the Zero Robotics international competition 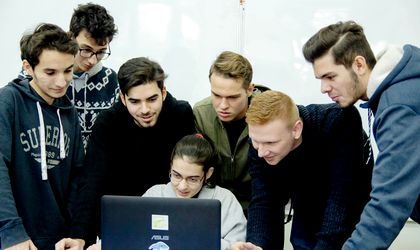 BRD – Groupe Société Générale is financing the participation of the heRObotics team in the final of the Zero Robotics international competition, organized by NASA, MIT and the European Space Agency (ESA). The heRObotics team consists of seven students from several high schools in Timisoara, some of the best young robotics experts in the world. They will arrive at the Massachusetts Institute of Technology (MIT) in Boston, United States, at the end of January.

Codes will be tested live, under microgravity conditions, on the SPHERES robots on board the International Space Station. The final of the competition, organized annually by NASA, in collaboration with the ESTEC Center of the European Space Agency (ESA) and the Massachusetts Institute of Technology (MIT) in the US, will take place on January 28th.

“For the second consecutive year, we are supporting the heRObotics robotics team to have access to a world-class pragmatic learning environment. BRD invests in the education of Romania’s future leaders in technology, culture and other areas of development, and NASA’s robotics competition is an incredible experience for young Romanian robotics. As the latest BRD communication campaign says, the future is for those who bet that the world will change through them, and the world is going forward because robotic passionate students like heRObotics do not let anything stop and create their own future,” said Roxana Milos, brand communication manager BRD – Groupe Société Générale.

“The fact that we were invited to the final of the Zero Robotics competition for the second time has made us pay attention to the effects of this experience. Two students are also present in the current team, and the other two are following their passion in the field of robotics. For example, one of the former members of heRObotics, Silaghi Fineas Florin, has shown his passion for cyber security as part of the team that represented Romania at the European Security Championship in 2017 in Malaga and was a finalist in the biggest competition International Cyber ​​Security: DefCon CTF Las Vegas. All members of the former team, now in the 12th grade, have continued to develop their passion for technology, and current team members feel inspired by the original team, from which they have inherited the passion for robotics,” said Gabriela-Nusa Cojocaru, coordinator of the heRObotics team.

The Zero Robotics competition faithfully recreates the steps by which a program is written to configure a real spacecraft. The participating students are thus taught to write the code that controls the position and direction of the satellite, communicates with other satellites and interprets the sensors to determine the next move, and more. Similar to conditions on a real satellite, developed codes are sent and implemented remotely, robots being led by astronauts from the International Space Station (ISS).

This year, students have been given the unprecedented task of successfully connecting two satellites in the shortest possible time, while avoiding the collision of satellites with space debris under microgravity conditions in the Earth’s low orbit. During the competition, the SPHERES robots will be configured using 3D-printed pliers onboard the ISS. The Zero Robotics competition aims to inspire future engineers and scholars, giving students the opportunity to overcome their limits and develop new skills in science, technology, engineering, mathematics (STEM) and helping them to master Essential engineer-specific skills such as problem solving, design thinking, operations training, teamwork and presentation skills.

In the great final of this year’s Zero Robotics competition, five Romanian teams from Sibiu, Targoviste and Timisoara qualified and three other teams from Timisoara, Sibiu and Bucharest in the Virtual Finals second round, with a total of 8 teams representing Romania.