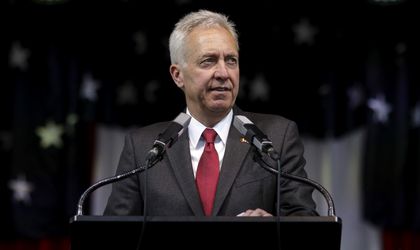 US Ambassador Hans Klemm warned the Romanian authorities about the dangers involved in the proposed changes to justice laws during a discussion with journalists in Targu Mures.

Klemm stated that the United States truly admire the progress Romania has had since 1989, regarding the efforts to consolidate institutions of democratic governance, embracing a democratic future and values, and its clear and unequivocal commitment to NATO and EU membership.

“We think that weakening the legislation that allows you to have an independent judiciary system and to launch a strong fight against corruption undermines national resistance and can expose Romania to threats that come from abroad, including from Russia. Corruption is a scene that hostile actors can use to break the foundation of a resistant state.

Romania is being recognized in the region for its efforts to fight against corruption, for strictly complying with the rule of law and ensuring the independence of the judiciary. Countries like Macedonia, Moldova, Ukraine, Bulgaria and others are coming to Bucharest to learn about the measures Romania has taken in its fight against corruption and consolidation of the rule of law.

As a result, it is very worrying to see efforts such as the ones being made now in Parliament, which undermine everything that Romania has achieved in the last 15-20 years, by building up all these institutions. And yes, as I tried to explain in the speech I held yesterday at the Babes-Bolyai University, we strongly believe that upholding the rule of law, the existence of an independent judiciary system, the fight against corruption all have an impact on national security and contribute to the state’s and government’s resistance”.