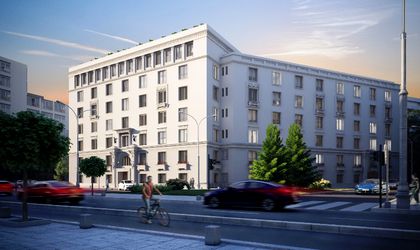 Real estate developer Hagag Development Europe, part of Hagag Group Israel, will start construction works for its first office project, H Victoriei 109, a building it acquired in March this year. Over EUR 8 million will be invested in consolidating and remodeling an existing building located on Calea Victoriei.

The building, ex Petrom headquarters, has GLA 6,000 sqm, and the height regime will be maintained at G+7.

“Our property on 109 Calea Victoriei is, for now, an unpolished diamond. We accept the fact that H Victoriei 109 will always be a part of the community’s past and we would like to preserve, as much as we possibly can, the cultural heritage of the interwar period. We will restore the facade of the building as it was originally designed and we will harmonize the initial architecture of the building according to current trends”, says Yitzhak Hagag, president of the Hagag Group Israel.

H Victoriei 109 will keep intact the architectural features of the building and its exterior will be restored until it reaches its original appearance. The consolidation, remodeling and upgrading works will be completed in the second half of 2019. The project will be BREEAM certified and will enjoy high energy performance, reduced operational costs and a minimal impact on the environment.

“We have decided to invest in this project and focus our efforts on revitalizing the building and, implicitly, the area. H Victoriei 109 is a transformational project, and it is also an opportunity to deliver an exceptional product to the office segment. The edifice has a personality of its own that combines the elegance of the old times with what today we call “high-end” spaces. We have both the necessary experience and the know-how to exploit the full potential of the building”, Cristina Ghita, sales manager, Hagag Development Europe, added.

Hagag Development Europe has launched an EUR 15 million initial public offering (IPO) on the stock exchange in Tel Aviv in May and the company said it would use the funding to finance its property investments in Romania.