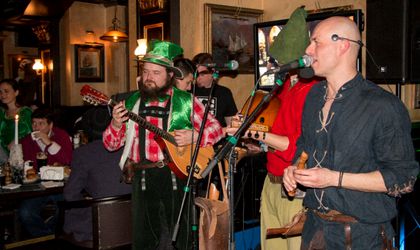 Guinness and Golin brought back the Irish spirit for Romanians willing to party with the occasion of the St Patrick’s Day. This year they launched the #GuinnessTache challenge, which targeted consumers, journalists and bloggers.

„St Patrick’s Day fits perfectly with the Romanians desire to party and enjoy life, therefore we proposed our Romanian consumers a week of memorable parties. Already become tradition, the events organized by Guinness on this occasion offer the start to Irish parties all over the country and awake people’s interest for the culture of a unique people. The online and offline activations proposed by Golin have succeeded in showing again that Guinness is the perfect ingredient to celebrate the Irishman day on the Romanian territories, through a party worthy of the Dublin pubs,” said Paul Markovits, vice-president of marketing at URBB.

„Every year we impatiently wait the Guinness brief for the St. Patrick’s Day’s celebration and we note in calendar in the 17th of March, even prior to finishing the former campaign. For the 2016 edition we wanted that the people taking part in the St Patrick’s Week celebration to become Irishmen and we invited them to obtain a perfect #GuinnessTache, savoring the unique taste of the Guinness pint. Therefore, we created an interactive communication strategy, in which the word was creativity and that has represented the brand’s typical Irish atmosphere in its finest, small details,” also said Ana Trif, senior manager at Golin Romania.

The communication campaign included a series of activations with journalists and bloggers that have been invited to the “green” party on the 17th of March. They were offered the unique challenge of this year – creating a #GuinnessTache. The traditional party took place in The Harp – Irish Pub, where stars, bloggers and journalists have shown their Guinness moustache, worthy of a perfect Irishman.

The fans of Guinness’ Facebook page were also involved in the campaign this year. The ones that have posted a selfie with the #GuinnessTache and the pin of beer entered a competition where they could win selfiesticks and their favorite beer.

St Patrick’s Week involved the roll out of several campaign activations in tens of cities in Romania, including Bucharest. On March 20 there was a parade of bagpipes and allegorical cars, one of the biggest events of such in Europe.

Moreover, the project also included a unique activation in Baneasa Mall, where Guinness gave the start of the party of the Saint Patrick’s Week and invited the visitors of the commercial center to join the flash mob of Irish atmosphere: Celtic music and dancing. The movie can be seen here.