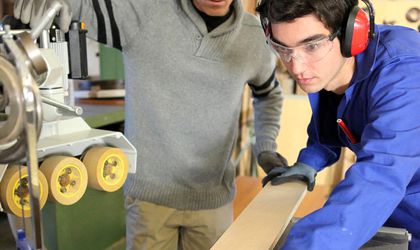 The Romanian government has amended the National Education Law, including fresh provisions that offer clearer rules for the dual-education system, something that foreign investors have been calling for in the recent years.

“The bill approved by the Government redefines the status of the dual-education system as an organizational form of the professional and technical education, carried out at the initiative of the interested economic operators, as potential employers and apprenticeships partners, based on a partnership contract and on individual contracts for apprenticeships, as the economic operators will cover the additional scholarships for students,” said the Ministry of Education in a statement.

The dual-education system will have a 3-year duration and will allow the graduates to obtain qualifications of level 3, 4 and 5, according to the National Qualifications Framework. The classes for dual-education can be organized both in public and private schools.

In the next school year, 2017-2018, people aged up to 26 that have passed the mandatory education period but have interrupted their studies can enroll for free in dual-education classes. The government has also regulated the way in which the costs of students with the transport and accommodation will be covered by authorities.

The new bill was rolled out with the input from foreign embassies in Romania, including those of Austria, Germany, and The Netherlands. The Romanian Chamber of Commerce and the Romanian-German and Romanian-French chambers of commerce were also involved, alongside the biggest private sector association Coalitia pentru Dezvoltarea Romaniei.

During the Wednesday meeting, the government has also approved certain fiscal facilities that will allow employers to deduct expenses relate to the training of students.

The dual-education system, which is very efficient in Germany and Austria, allows students to get theoretical training and to apply what they learn during paid apprenticeships at companies enrolled in this program. This initiative has been very popular in the manufacturing sector, for instance.