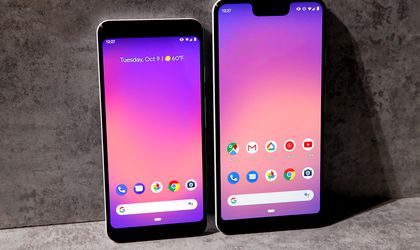 Google has officially launched its new smartphones Pixel 3 and Pixel 3 XL, confirming most of the rumors that have circulated about their hardware specifications, but bringing some surprising software features, Mediafax reports.

The new smartphones come with a series of dedicated features, with AI-powered improvements for both their cameras as well as the day-to-day use. These are Google’s first water-resistant smartphones that follow the IP68 standard.

The Pixel 3 comes with a 5.5” OLED panel for the first time, with an 18:9 FHD+ format, and is the smaller version of the XL model but with similar hardware characteristics. It has a Snapdragon 845 chipset, 4 GB of RAM and 64 GB of internal storage, Bluetooth 5.0 and front stereo speakers. Google also introduced a new security chip called Titan M, which is similar to what Apple calls a “secure enclave”, which stores personal data locally and can’t be accessed from anywhere else.

The Pixel 3 has two 8 megapixel cameras on the front – one captures regular images, while the second has a wider angle for group portraits. It has glass casing on both sides as well as a wireless charging module on the back.  Its back camera has 12 megapixels and brings features like portrait and night mode as well as an AI-improved zoom.

The Pixel 3 XL version has a 6.3” QHD+ screen and identical hardware features to the smaller model.