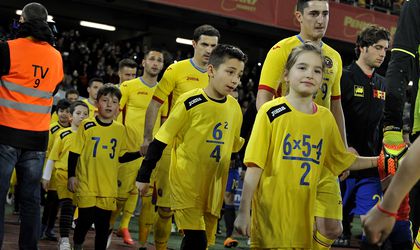 Geometry Global Bucharest has created for the Romanian Football Federation (FRF) a social campaign bringing together education and football. The campaign FRF supports education echoed all over the world and received extensive coverage in international press after the players in Romania’s national football team wore T-shirts with math formulas before the game with Spain.

The action marked the launch of the first math manual published by Niculescu Publishing House for the 4th grade. The auxiliary manual is the start of an extensive program through which FRF supports children’s education, a reaction to counter the school drop-out, which has a very high rate in Romania. Starting September 2015, Geometry communicates and implements FRF’s Grassroots programs and its young talents’ recruitment ones.

“We started from Grassroots programs and we wanted to give them a new breath. We had in mind for a long time a national program in which football helps children learn easier, but we needed a smart way to launch it. Two months ago, the idea of transforming the t-shirts numbers in mathematical formulas came and we went round the world with 11 T-shirts. This is what happens when a copy draws as in post-its and an art director always write in mails: ‘keep it simple. Stupid’. I am talking about Bogdan Costin (copy) and Stefan Vasilachi (art). What happened next is the credit of the entire team who transformed the idea in the most vocal image campaign happening lately in Romania,” said Mihai Fetcu, creative director of Geometry Global Bucharest.

“We were impressed by the proposal of educational program from the very first meetings. We saw how it developed and we lived the emotion of the implementation together with the representatives of the international football, the Romanian National Football Team, Federation’s team, agency and representatives of the publishing house. Geometry Global has all our trust and support to bring the project further. We will generate together a change which will bring football closer to the educational environment,” also said Razvan Burleanu, FRF’s president.

“We are thanking the Federation for its trust and openness in creating this beautiful relation which, more than what is seen “on stage”, is a true friendship. And, more than anything, we thank the National team’s players who, although they were undergoing stressful situations, accepted out proposal to be the ambassadors of this program,” commented Mircea Pascu, Managing Director Geometry Global.

The campaign had both local and global coverage, being mentioned by media powerhouses such as The Guardian, Huffington Post and BBC. Romanian TV stations broadcasted reports about the issue of school drop-outs.

The teams that worked on this campaign comprise: