GAV to communicate for Scena9, the cultural hotspot of BRD – Groupe Societe Generale 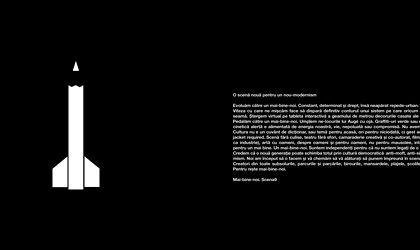 GAV communicates for ”Scena9”,  the cultural brand of BRD – Groupe Societe Generale, the agency has announced. GAV, which specializes in the creation and acceleration of content and is the first company doing business in cultural marketing in Romania was selected by BRD to create the format and the content of the first offline manifestation of the brand, the princeps edition (fall-winter 2015/2016) of the Scena9 magazine. The launch also marked the tenth edition of FNT – Festivalul National de Teatru (The National Theater Festival).

The manifest « A new scene for the non-modernism» bares the signature of Lucian Georgescu and is pictographed and video graphed by Marius Rosu. ”Creators from all the undergrounds, parks and parking lots, offices and mansards, beaches, schools, alleys, unify. For some better us.”

The cultural marketing partnership between GAV and BRD will continue with the launch of the web videos series ICAR – an alternative history of the Romanian cinema, a production CINEPUB in partnership with Scena9. CINEPUB by GAV is the first Romanian cinema portal that distributes free online local productions: fiction, documentary, animation, rare pieces, short films and movies.

”The wooden language of the text named press release often uses, in a hypocrite way, the subject „challenge”, most of the times actually referring to a maximum border. When it comes to us, it was about pure luck ( even the man can have a saying in the creation of it). It represents a big chance the meeting with a corporation that has a visionary and really daring thinking and that is able to asume the cultural communication for a long period of time, consciously and coherently. I, for one, haven’t seen this happing in the industry for more than 10 years now. And it’s refreshing to do the base of the job, after 25 years : simple and honest copy.  You may say I am an old fashioned creative writing teacher if I wrote a brand platform in 30 minutes, just like the course of writing under pressure in the first year of the university,” said Lucian Georgescu, managing partner at GAV.

”The honest and good copy writing, like Lucian calls it, is more and more rare, and therefore, easy to be recognized. This kind of collaboration is also a thing of chemistry. Lucian and his team from GAV have felt the best what Scena9 si all about: a playground of ideas and new people, for the future, for those <

GAV, content accelerator, is an independent agency formed in 2003, along with the first local cultural marketing atelier, balkanski, both founded by Lucian Georgescu, the veteran of Romanian creatives, as he likes to call himself. The agency is also well known for the biggest Romanian cultural marketing campaign – Sibiu – Cultural European – 2007. Among its actual clients, GAV has: Allergan, Bosch, BRD – Groupe Société Générale, CEO Club Romania, Edenred, Lindab, Selgros, TIFF. GAV is a member of Interpartners Worldwide – Independent Advertising Agencies Group.