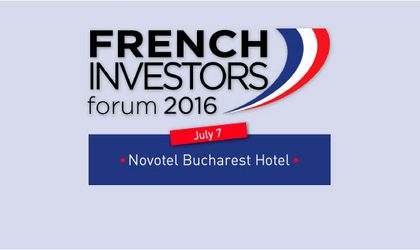 Business Review magazine organizes the seventh French Investors Forum on Thursday. During this exclusive event, representatives of large French companies present in Romania will outline their investment plans on the local market.

HE Francois Saint Paul, the Ambassador of France in Romania: Today, the investment stock, if we look at official figures, we would come third or second by the total amount of investments. These investments are everywhere, meaning that we don’t have sectors that we do not cover.

He said that banking, pharma, automotive and logistics are some of the sectors with strong French presence. He added that the aeronautic sector has a lot of potential in the country, citing the plant that Airbus has in Brasov city, where it makes helicopters.

The political relations between Romania and France have recovered to a level that hasn’t been seen since Romania joined the EU, said the ambassador. Saint Paul said that president Klaus Iohannis and PM Dacian Ciolos supported the improvement of communication between the two states.

“After 2007, Romania faced several events to which it had to adapt, even the financial crisis, but today it is neccesary to have a new country project linked to the new realities of the European Union,” said the ambassador. He added that the rest of the EU members need to focus on the new reality after the Brexit referendum.

“I feel in France a new curiosity about Romania. There are certain cliches regarding the image starting 2011, but they are getting old,” said Saint Paul.

There are 4 million Romanians abroad, said the ambassador.

Yves Martin, chief marketing officer, Orange Romania: The brand attachement to Orange in Romania is very strong. We have returned to growth for more than one year. Today, one in two clients has a smartphone.

“We will continue to invest in the network,” said Martin. This year, Orange enters on fixed internet and TV, he added.

Martin said the skills of Romanian employees in IT and marketing are “impressive”.

Franck Haettel, general manager, Total Romania: In Romania, the particularity having an industrial sector that consumes lubricants is very important.

Our lubricants plant in Brasov has the latest technologies and provides products for local and international clients, said Haettel.

“I am confident for the moment given that the oil price has dropped. (…) I think the lubricants market will develop,” said the executive.

Yves Caracatzanis, general manager, Renault Group Romania: We are focusing a lot on R&D and create products that respond to the clients’ needs. The automatic gearbox for Dacia was designed and manufactured in Romania, said the GM.

The education and talent retention is important in Romania. The second point, to avoid the brain drain. Tax incentives for engineers in Romania similar to what is happening in IT would help to see less specialists leave the country, suggested Caracatzanis, citing the intention of the government to support the research in R&D through a better taxation regime.

We have invested starting EUR 2.4 billion in the industrial system and different activities. Last year, the group registered a EUR 4.7 billion turnover, accounting for 3 percent of GDP.

We are registering one new car compared to three used vehicles in Romania, said the executive, adding that the sales of new cars have not returned to pre-crisis levels.

“We will continue to invest (…) to maintain our competitivity,” said the Renault representative.

Caracatzanis commented that Romania has funding for infrastructure, but the problem that the pace of development and supervision of construction activities needs to be improved.

Edouard Millot, partner, FiNEXPERT: We need to know that in France there are mechanisms for R&D that can be transferred in Romania.

Dana Gruia Dufaut, partner, Gruia Dufaut Law Office: Romania still has the growth potential. Romania needs to have a Parliament that understands and supports investments. Today, Romania looks like a paradise for investments compared to the gloomy atmosphere in France.

Guillaume Leurent, deputy CEO, Industrial Montaj: The people in Romania are passionate, want to do a lot of things and is the country of possibility. He added that Romanian employees have become more aware of the safety measures in the past years.

He said that the company is grappling with the brain drain, adding that there are problems for instance to find welders. Industrial Montaj is trying to find projects abroad, as the investments in the oil & gas sectors have fallen dramatically due to the massive drop in oil prices. He added the company plans to create its own welding school in the country.

Romania is competing with Poland and the Czech Republic and I see this because I am travelling to work with investors.

“Romania has a very bad image which is slowly changing,” said Ravon. He added that Poland is colder when it comes to the way in which it treats investors.

Romania has a very good ratio between the quality and costs of life, said the director.

Stephane Dumas, managing partner, Meli Melo Paris: I have simply fallen in love with Romania when I arrived here for the first time here when I was younger. I came to Romania in 1994, although initially I was planning to move to China.

For the first time in 5-6 years there are Romanians who called us to ask if we have jobs available.