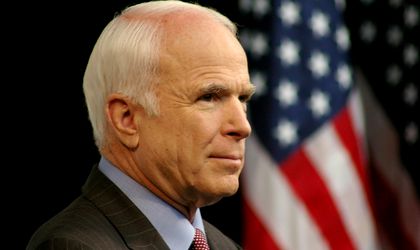 US Senator John McCain, a veteran of the Vietnam war and former US presidential candidate in 2008, has died. He was aged 81 and had been diagnosed with brain cancer in July 2017.

He is survived by his wife Cindy and daughter Meghan. According to Fox News, he died on Saturday.

On Friday, his family issued the following statement: “Last summer, Senator John McCain shared with Americans the news our family already knew: he had been diagnosed with an aggressive glioblastoma, and the prognosis was serious. In the year since, John has surpassed expectations for his survival. But the progress of disease and the inexorable advance of age render their verdict.”

They added, “With his usual strength of will, he has now chosen to discontinue medical treatment.”

On Saturday, his wife Cindy that her hear was “broken” following the passing of her husband.

“I am so lucky to have lived the adventure of loving this incredible man for 38 years,” she said. “He passed the way he lived, on his own terms, surrounded by the people he loved, in the the place he loved best.”

McCain’s daughter Meghan also said: “My father is gone, and I miss him as only an adoring daughter can,” she wrote. “He was a great fire who burned bright, and we lives in his light and warmth for so very long. We know that his flame lives on, in each of us. The days and years to come will not be the same without my dad — but they will be good days, filled with life and love, because of the example he lived for us.”

Jihn McCain was born in 1936 in the Panama Canal Zone. After graduating from the Naval Academy in 1958, he went to Vietnam and survived five years as a prisoner of war.