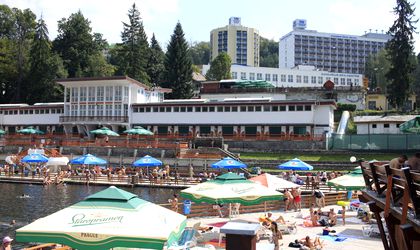 When it comes to Sovata’s development, sustainability is the key word. One of the recognizable brands of Romanian tourism during the communist years, Sovata is still going strong. With a 100 percent occupancy rate in the summer of 2016, the health resort is relying on a tried and tested recipe for success: attracting Romanian tourists by offering them exactly what it did 27 years ago. In its three hotels, Danubius Hotels Group welcomes most of the incoming tourists with an eye to add value to their experience while seeking to grow at a sustainable pace.

Sovata’s reputation as a health resort was built around the unique properties and health benefits of the salt waters and mud extracted from Lacul Ursu (The Bear Lake). With a 40,000 sqm surface, it is the largest salted heliothermal lake on the continent. The existence of a top layer of rainwater, which acts like a lens and enables the sun to warm up the lake up to a depth of two meters, creates a unique heliothermal effect. In addition, the mud deposits found on the bottom of the lake have outstanding health benefits.

Located about six hours away from Bucharest, the resort attracts tourists from around the country and abroad. The city has grown to 15,000 inhabitants and receives around 65,000 tourists every year, according to data provided by the Romanian Organisation of Spa Owners. Most of them, around 80 percent, are welcomed by the three hotels owned by the Danubius Hotels Group, which also holds the rights to use Lake Ursu.

The chain purchased Danubius Health Spa Resort Sovata (four stars), Danubius Health Spa Resort Bradet (four stars) and Hotel Faget (two stars) in 2000 and has invested since over EUR 20 million. Next, the group is planning to invest around EUR 6 million in the modernization of Hotel Faget. Estimated to last about year, works will start in 2018 and will give the hotel an upgrade, allowing it to be reclassified as a three star hotel, Janos Fulop-Nagy, General Manager of Balneoclimaterica SA, the entity that operates the three hotels, told BR.

Growth in Sovata is bound to be sustainable

In a world where businesses compete to always do something different to attract customers, surprisingly, Sovata’s winning formula consists of offering the same combination tourists have come to know and appreciate. The development of Sovata is conditioned by its size and in many ways, it bears a resemblance to that of Lake Ursu. In order to maintain its unique properties, it is crucial that the lake be exploited sustainably. In order to protect the heliothermal phenomenon, tourists can only bathe during certain hours, and, during lunch hours, when the sun is in full force, access is restricted, so that the currents can refresh the water.

Similarly, for the General Manager of Balneoclimaterica SA, which, with its 280 staff, is the biggest private employer in the area, development must come at a sustainable pace. According to Fulop, in the spa&balneo tourism sector, the return on investment is a long-term process. For instance, it took the investors eight years to recoup the investment made in Danubius Health Spa Resort Sovata, the biggest of its three hotels, less, however, than originally estimated.

Before 1989, the resort grew and built a reputation due to a constant stream of tourists who were sent through the country’s well-established system of unions. After the collapse of communism, Fulop argues, the resort suddenly had to brace itself for capitalism and was left with a well-functioning infrastructure but without a centralized national system of referrals. Today, the referrals provided through the National Health Insurance House are proving a good substitute, and the hotels he operates will continue it in the future. According to Fulop, around 80 percent of tourists welcomed in the three hotels owned by the Danubius Hotels Group are Romanian. This is a state of affairs, Fulop, who has been with the business since its early days, sees no problem with. “Romanian tourists are the best,” he argues. “We attract them by providing solid services, priced at a level that is customer-oriented,” he explains. The rest of tourists come from Moldova, Hungary, Israel and the Netherlands.

Last year, the company had a turnover of RON 36 million and recorded a RON 7.4 million profit.

In the first eight months of 2016, the three hotels owned by the Danubius group attracted 47,825 arrivals, 138,931 overnight stays and recorded an occupancy rate of 72.5 percent. Asked whether he intends to employ means to push the occupancy rate upwards, Fulop hints that, here too, sustainability is key. “When a hotel reaches an occupancy rate above 70 percent, it becomes difficult to function at an optimum rate, so the answer is no” he explains.

And things are poised to develop a lot along the same path. “We will continue to maintain the relationship with the National Health Insurance House, we will not exclude the pensioners. But we will develop other packages, after the modernization process is completed,” he added.

Alongside the health package, consisting of baths in the salt lake and mud therapy, Sovata offers numerous possibilities for relaxation and access to nearby tourist attractions. Despite being located on a salty terrain, Sovata is nonetheless surrounded by hills covered in broadleaf forests, ideal for hiking. The nearby salt mine Salina Praid, located a short drive away, is one of the area’s major attractions, as is Mocanita, a train pulled by a steam engine that allows one to discover the surroundings at a leisurely pace.