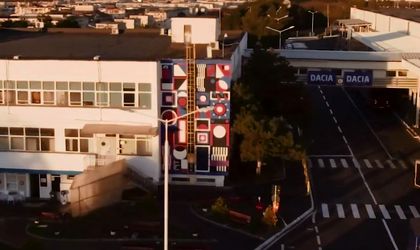 Ionut Stefan Anghel (23), Iulia Panoiu (21), Alexandru Daniel Florea (23), Mara Gudina (23) and Rusu Ovidiu George (20) are Bachelor’s and Master’s students at the University of National Arts in Bucharest, as well as recipients of scholarships from The Princess Margaret of Romania Foundation. For a week, they moved to Mioveni and accepted Groupe Renault Romania’s challenge of setting free their imagination, creativity and chromatic expression. They recreated one of the building’s walls located near the industrial platform, in a high traffic area, in order for it to be seen by as many employees as possible. The work’s title is inspired by the creations of three international artists: „Omagiu pentru Vasarely, Soto and Tiguely”.

“Initially, we had a list of 5-6 artists, of which three were a great fit with the minimalist-geometric style we had in mind for the mural. And they were: Soto, Tinguely and Vasarely. The elements in their works helped me create the mural painting’s layout. The big stake was to capture each artist’s essence, as well as to succeed in bringing them to the same place, to make them fit compositionally, chromatically and in terms of theme,” said Ionut Stefan Anghel, one of the artists. Their impressions and experiences during the time spent at the factory will be revealed during a collective interview and a video available here.

The campaign “Uzina inspira pasiune” (The factory inspires passion) was launched in 2016. Another young artist, this time in the fashion design world, Larisa Dragna, discovered the factory and the industrial environment inspired her fashion creation. At the same time, the artists with scholarships from the Princess Margaret of Romania Foundation created an art installation from engine pieces that they saw in the manufacturing processes at Dacia Mechanics and Chassis Factory.

Renault’s contemporary art collection contains works from visionary artists that, at the end of the ‘60s, produced real changes in the art scene and society back then. Even apparently without connection – the auto and contemporary art industries created confluences and developed starting from innovation.