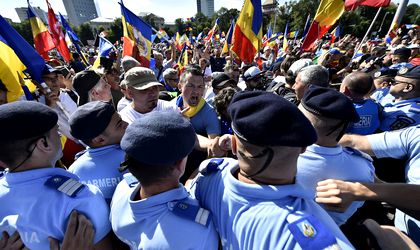 Police made the first arrests connected to Friday’s night violent actions in Victory Square. Yesterday evening, prosecutors ordered  the arrest of two men, 24 and 30 years old, who were charged with assault and disorderly conduct.

According to the Bucharest Police, the two cases are to be submitted to the magistrates of the Bucharest Tribunal with a proposal for preventive arrest, and the investigations in question continue.

Prosecutors of the Prosecutor’s Office attached to the Bucharest Tribunal and police officers at the Homicide Service have so far heard about 20 people in connection with violence from the protest Friday, informs the Capital Police.

In parallel, investigators also analyzed recordings made by the media.

The activities carried out are aimed at establishing the identity of those present in the area of ​​aggression and their deeds, according to the Capital Police. Tens of thousands gathered on Saturday in Victoriei Square for a new protest, and many came equipped with protective masks if law enforcement forces would use the tear gas again, but the events were peaceful.