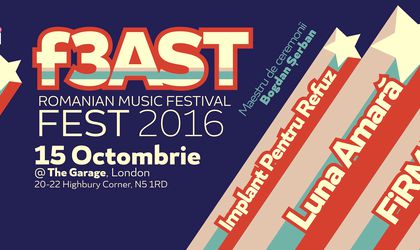 On the stage will perform four famous Romanian music bands: Toulouse Lautrec, Firma, Luna Amara and Implant pentru Refuz. The event will be presented by the famous radio and events host Bogdan Serban.

fEAST – Festival of The East reaches its third edition. “The whole idea started from a concert I organized in London, when I brought Subcarpati, after hearing them at Radio Guerrilla. I liked them a lot and when I’ve met Bean, I was convinced of the fact that the band is special. The concert was a success, creating the same feeling you have when you go and see other big bands playing, as I had many times before. After the success with Subcarpati, I proposed myself to promote the Romanian music in the UK and at the same time promote Romania through music,” said Catalin Savin, the event’s organizer.

Considering that out there is a lot of great Romanian music and being a great fan of it, he found difficult choosing only bands, from all of those talented artists. When deciding on the bands that will play at a certain edition of the event, he usually consults himself with his friends, trying to make sure he takes the right decision.

At the first edition of fEAST, in 2014, the bands playing were The Amsterdams, Mihail, Robin and the Backstabbers, Subcarpati, CTC, The Speakers, Electric Tuxedo. It was a success bringing 800 people and the feeling that there is a market for this event and for future ones.

Therefore, at the second edition, the festival continued to have 3 days (October 16-18 2015) and brought more people – over 1,000. The bands playing were: on October 16: Gojira, Robin and The Backstabbers, Shadowbox; October 17: Suie Paparude, byron, Coma, E.M.I.L. and on October 18: Phoenix, Blue Nipple Boy, Moon Museum.

This year’s main change is represented by the fact that the festival will be held only on October 15, but it still is a big “Shout Out for the Romanians in UK and a way for the British and foreigner ones living in the UK to interact and get to know something about Romania, through its great music. I promise all the people that will be attending that this year’s edition will be at least as great as the previous two. Moreover, the festival is still held at The Garage, a place with great artistic charge, where a lot of famous bands played during the years,” added the organizer of the festival, exclusively for Business Review.