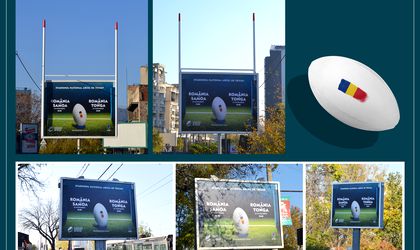 With the occasion of the two test games, on November 18th with Samoa and the 25th with Tonga, that represent an important training for the Rugby Europe Championship retour and the 2019 World Cup qualification, the FCB Bucharest creatives aim to re-bring rugby in Romanians’ attention in an unconventional manner.

This is how it was born a special series of billboards that announce the two games, one illustrating the posts –an open invitation to the public to get trained to a “transformation” towards new Romanian victories or new creative ways of showing the support towards the performance sport.

„There are so many ugly billboards in the city, that we decided to do something beautiful. Now, seriously speaking, rugby is a sport that cannot brag about a lot of promoting, which is totally unfair. And the whole shape of the outdoor structure inspired us immediately and this is how our billboard came up, where eventually you can prepare yourself for a transformation,” said Claudiu Dobrita, creative director, FCB Bucharest.

The motivation was simple: rugby, patriotism and creativity. The two Stejari test games represented for the FCB Bucharest team an occasion for promotion, but also of encouraging the Romanian rugby.

„What kind of creative doesn’t want to create something beautiful and outside of the box? I am happy that we can promote the Romanian rugby and especially the two games of the National team. We are expecting the ones from Tonga and Samoa to <

„With the help of some special people that found themselves in the values and philosophy of the sport with the oval ball, rugby starts with a new visual communication for its existent and potential public. Our friends from the FCB Bucharest agency assumed the mission of being alongside us in order to promote the spirit of a sport in which the performance is essential, in its service being put the respect, the discipline, the integrity, the solidarity and the passion, to which they will now add creativity. Bucharest will host not only the test games in November, but also a unique message meant to attract the attention over these events and over rugby in general,” said Alin Petrache, president of the Romanian Rugby Federation.

The teams that were part of the project are: