Steve Bannon, former Cambridge Analytica VP: “Facebook data is for sale all over the world” 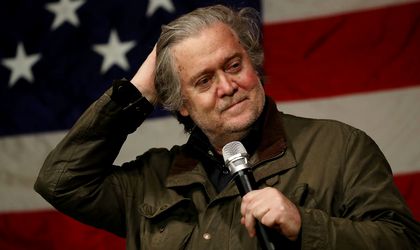 Steve Bannon, the former chief strategist of President Donald Trump and former vice-president and board member of Cambridge Analytica, has denied his involvement in the “dirty tricks” of the consultancy firm which harvested the personal data of millions of Facebook users, the Guardian reports.

Bannon said: “I didn’t even know anything about the Facebook mining. Besides, Facebook data is for sale all over the world.”

He blamed the questionable practices on Cambridge Analytica’s parent company, SCL, which he described as “the British guys, old Etonians and guys from Oxford and Cambridge” – in other words, members of the elite, a part of society which Bannon has attacked before, through his media outlet Breitbart and through the way candidate Donald Trump positioned himself as anti-establishment in his campaign, which was run by Bannon.

Bannon also denied that his former benefactor, billionaire Robert Mercer, who co-owns CA and was a major donor to Trump’s campaign, had any financial links to SCL.

Cambridge Analytica, as revealed by the Observer and the Guardian last week, scraped millions of Facebook profiles of US voters and information about their friends, and then used them for political propaganda. Former CA employee Christopher Wylie told the Observer: ““We exploited Facebook to harvest millions of people’s profiles. And built models to exploit what we knew about them and target their inner demons.”

Facebook CEO Mark Zuckerberg admitted that the social media network made mistakes and apologised for a “breach of trust” with its users.