Expat opinion: Seven reasons to raise a child in Romania, and one reason not to 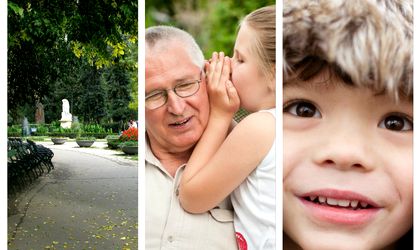 In our regular look at life here from an outsider’s perspective, BR’s resident expat presents seven reasons to raise a child in Romania, and one reason not to.

You can take your child out late. In the UK, babies and toddlers are often being prepared for bed from about 5pm. If you go out with your infant in the evening, especially to a restaurant or other adult-orientated venue, you’ll be about as popular as Donald Trump in a women’s changing room. Not so in Bucharest, where the Latin family vibe (think of those convivially nocturnal family gatherings in Spain) means your little ones can roam freely after the sun goes down. (This was annoying before I became a parent, but it’s great now.)

Parks are safe. Few would dare set foot in a British park after sunset – when they become the preserve of threatening teens drinking cider. Maybe it’s because most Brits live in houses and so have their own garden, and therefore have less need for public green space, or maybe it’s the presence of guards, but Bucharest’s parks have a welcoming family atmosphere until late at night.

The smoking ban. Before March 16th, doing things in Romania while pregnant or with children was a real problem, owing to the smokiness of almost everywhere (except malls, some posh cafes and museums and galleries). Since then, you can safely drag your brood anywhere you fancy going. Why not get them started young La 100 de Beri? (Joke.)

Romanians like children. Okay, some Brits like children as well. But, unless you pick a really family-friendly café or restaurant, if your little darlings start acting up a bit, you’ll get The Look from your nonplussed fellow customers. In Bucharest, most people actually laugh and say hello, rather than tut, and genuinely don’t seem to mind if your fleeing toddler eludes your grasp and pops his head out from under their table. And when your offspring responds to being wheeled round a gallery by repeatedly screaming (because what a great echo it has!), other art lovers smile indulgently. What a relief!

Grandparents! Many British baby boomers, having lucked out on the property market, are now busy chasing autumn years’ fulfillment – taking cruises, volunteering, doing courses… In short, not making themselves available for round-the-clock babysitting. So selfish! Romanian seniors are much more likely to be seen pushing their grandchildren around the park than off on a coach tour of Croatia or at art class.

Childcare is affordable. Of course, not every parent is lucky enough to have nearby grandparents to rely on, and if you don’t, you might need paid help. The average cost of sending an under-two to a nursery full time in Britain is EUR 240 a week – a week! So nearly EUR 1,000 of your paycheck is eaten up by having just one child looked after. Here, not only are nursery fees more reasonable (perhaps excluding those at the fanciest international schools), but you can probably also stretch to a wonderful bona (nanny) to help out in your own home.

Brexit. Who wants to raise their kids in a close-minded, xenophobic country where talking in a foreign language can prompt a passing knuckle-dragger to shout, “Speak English!”? Sadly, such thugs feel empowered and legitimized since the UK’s senseless act of self-sabotage (the EU referendum vote). Much better for your young ones to grow up in a country where (most) people believe that things are getting better, which is forming closer ties with other nations, not retreating to isolationism and bringing economic disaster upon itself.

Hat mania. Picture the scene. It’s a mild afternoon, perhaps in April or October. You’re strolling round the local park with your little one, who’s sensibly dressed in a coat, and enjoying the spring/autumn breeze. You won’t get far before a bystander warns you darkly, “That child should have a hat on.” “But it’s 16 degrees!” you reply, astonished. Doesn’t matter. The Baby Hat Police will get you. It might be warm, you might be about to get into your car, you might even be indoors. Your kiddo’s hatlessness will be remarked upon. It’s not that Brits won’t judge your parenting – they will (although they’re not so stringent about hats on mild days). But they’ll never tell you to your face.