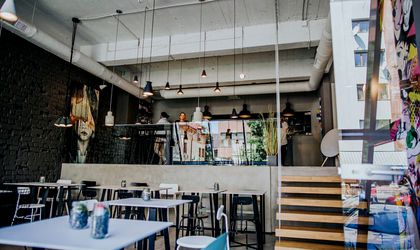 I feel sad writing this, for I really want this place to succeed. But, I found a major error on every dish I tried, which had the house gotten it right, they would have been sensational. So near, yet so far. It lives on Floreasca, in the company of the coolest bar/restaurant neighbors in town. If you don’t know it, Floreasca is rapidly becoming the center of social gravity for people who have grown up and are tired of grubby, seedy Lipscani.

So I told Blondie that we were going to a burger bar, at which point she wailed “I’ve never had a Big Mac and I won’t pollute my taste buds with one now”. I intoned that we were going to whoof gourmet burgers – and by gourmet, they certainly were! Each dish comprised of 2-3 small burgers, crowned by a bun (either green, white or black) of superb quality. The creative thought in designing the menu has to be applauded, as do the prices, which are a bargain.

So away I went to a duck burger – minced (tocata) duck topped with fried foie gras and layered with crispy onion, plum jam and pomegranate sauce, all for a mere RON 38. This would be fine on a plate, but having been ‘burgered up,’ gravity took its toll and the duck juice, jam and sauce dripped into the bottom bun, rendering it a mushy bread of terrible sweetness. Yes, that great combo was not meant to be all mixed together at the bottom of the dish. Not nice.

Now off to a squid burger – with 3 huge squids and at a bargain price of RON 38, I could not see how the House could possible make a profit at this price, but I was not about to complain. However, more problems spoiled my treat. Have you ever wondered why squid is prepared the whole world over with onion, garlic, wine and herbs? The answer is simple: without the aforementioned, squid is unpleasantly overpowering. But the house missed out on the above, together with all the seasoning and simply added an exotic touch of black ink from a cuttlefish, with the result being another soggy bread bun base.

They were generous with their black ink as they added it to all their fish burgers, namely salmon with rucola, lime chutney and oyster sauce, and sea bass with mayo, pickled red onions and cucumber.

Well, could anything go right? Yes and no, for Blondie ordered BBQ spare ribs which she loved. A rack of 10 ribs, slow cooked to perfection. She grinned in satisfaction as a trickle of BBQ sauce ran down her chin, which reminded me that we were not given a necessary finger bowl. But this dish was spoiled by the addition of pomegranate sauce to the BBQ sauce, with a horrible result. Pomegranate has no place in a European kitchen and should be confined to Asian cuisine alone.

I was desperate to find something right, so I ordered a safe lamb taco. But they still messed up, because the lamb was an inspirational choice, but they just had to goof up by serving the corn taco chips soft (too much exposure to air) rather than crispy and crunchy. Worse still, the minced lamb had no seasoning whatsoever and this red hot Mexican dish was patronizingly dumbed down to Romanian standards by omitting hot chillis, cumin and fresh coriander.

By now, I was aware that I was as eating my way through the menu in the hope of finding one perfect dish. So I settled for a crispy beef burger. It was almost a classic, sexed-up beef burger with salad, bacon, crispy onion, mayo and ketchup. With minced high quality sirloin beef, what could possibly go wrong? Plenty!

For the house is out to impress you by cooking all its beef dishes in Wagyu beef lard. Wagyu is Australian beef from the four primary breeds of Japanese cows which produce the finest, most exquisite and expensive beef in the world. But the cow’s fat which has been rendered (fried) down to produce the lard is far from fine and exquisite. In fact, it is downright unpleasant, which explains why it is omitted from every fine kitchen restaurant which you will ever encounter.

Rather than enjoying the sensation of fine minced sirloin beef, all I could taste was the overpowering lard. I could weep tears of frustration at the silly mistakes the house made on everything we sampled. It would be so simple to put it right and I hope they do so.

I feel affection for EMTE, for it puts me in mind of the terrible school reports I got as a kid, throughout my entire childhood. Year after year, my tutors repeated “he doesn’t pay attention,” “he should try harder,” ”he can do better.” I apply this to the house.