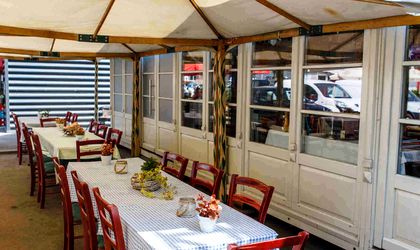 For 20 years I have bemoaned the lack of integrity in Bucharest’s ‘foreign’ restaurants, almost all of which are culinary frauds, which import no food whatsoever from the nation they represent. Rather, they just pop around to their local Bucharest supermarket and sell you local food with foreign names attached.

The worst offenders are the phony Italian chophouses, followed by so-called Chinese and Thai. Cheats, all of them. But Don Q is not in the company of these scurrilous rogues, for it is authentically Spanish, with a Spanish management and chef.

Don’t go there for a romantic candlelit dinner. It is rough and ready in the fashion of a German kneipe, or a Greek taverna. It is a place for foodies who adore fine wines and powerful Spanish cuisine.

Tables are long benches seating eight covers each. This is for good reason as the clientele do not conform to the beer-swilling stereotypes of Lipscani clubbers; instead they are happy, boisterous ‘family type’ locals and regulars who all seem to know each other, hence the long tables. Yes, they were uninhibited, happy and Spanish!

I was celebrating Britain’s greatest achievement since winning World War II singlehandedly, namely the fabulous Brexit victory, so we were in a good mood. This was enhanced by something apparently eccentric, but not in reality: a huge bowl of seashells on each table. They were there for a good reason.

Look at the map of Spain: it is surrounded by ocean, the produce of which has never been seen in Romania. So although a sophisticated European will recognize and know the names of the fish that recently departed these shells, there is, in most cases, not even a name in the Romanian language for many of them. So order by pointing at your chosen shell, for the House imports them from Spain from time to time.

In fact, they import everything on the menu. Spanish food is cooked with passion. Not a la francais whereby French chefs measure each ingredient. No. Spanish chefs throw in mountains of garlic, shovel loads of spices and rivers of wine in their sauces. It is fabulous.

So a simple starter of ‘garlic prawns’ was so much more. We were asked if we wanted it simple, or with wine or hot spices. We chose both wine and spices. It was fabulous, with tender prawns imported from Valencia, swimming in a lake of wine, spices and expensive olive oil. Blondie joked that the waiter should have said, “Would you like any prawns in your olive oil?” It was so good we insatiably soaked all the oil and wine up with fresh brown bread.

We passed on imported prawns flambéed in either whisky or rum, and settled for another starter of fresh mussels (moules/midi) in a sauce of tomato juice, garlic olive oil and pimento (paprika). Oh, it was so good. Romanian restaurants all screw up the mussels by overcooking them until they shrink into bullets. These were perfect, soft, fat and languishing in a perfect garlic, wine and tomato sauce.

Next my friends ordered a classic ‘gazpacho’, the world famous chilled tomato and vegetable signature dish of Andalusia, which is so often listed on the menus of tourist-trash Italian trattorias. Here it was perfect and correctly seasoned and presented with a side of raw chopped veg to add to the soup.

Away to white ocean sea fish with ‘bacalao’ (salt cod). This dish has a 400-year-old pedigree, and is almost the national dish of both Portugal and Spain. To make it, take a huge, thick fillet of cod, and smother it totally in sea salt. Press down and keep it chilled for 3-12 months. This process dehydrates and preserves the fish. To serve, break the salt crust and rehydrate the cod by washing it for two days.

The result is a white, light, fluffy cloud of fish with a deeply enhanced flavor. Thereafter, they steam the fabulous beast. The House offers it with a garlic sauce which must be avoided as it is far too heavy. I suggest you pour over an alternative, lighter sauce from another House dish.

Again, and still in the ocean, we ordered ‘merluza’ which was sliced on the bone and charcoal grilled in the fashion of a swordfish. It looked and tasted like a swordfish, but at a fraction of the price. It was good, but dry and needed a sauce.

At this point, we were far too full to try their meat dishes. The House has a wood-fired oven which they put to good use with their roast lamb and suckling pig. To be fair to them I suggest you book these two beautiful dishes in advance.

More imported goodies abounded, such as hams (including Serrano) carved off the bone, and spicy Chorizo. If you have only tasted local Romanian imitation Chorizo you will never buy it again after you have eaten the real thing here.

Romania in general and Bucharest in particular has the largest concentration of culinary fraudulent restaurants in the whole of the EU. Thus far there are only two French, one Turkish and one Indian restaurant which are ethnically/culinary correct. I am pleased to say that Don Q can be added to this exclusive group.