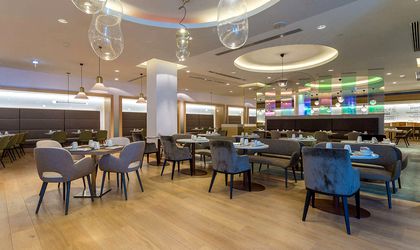 Every major hotel and several restaurants compete for your business in the Sunday brunch market. So who is the best? The Radisson reigned supreme for 12 years, until two years ago when the hotel opposite blew the market away with the most fabulous brunch ever, making that hotel clearly number one.

But sadly that hotel has now changed its brunch format, so although it is still good, it is time to evaluate the market to identify the best. So, proudly step forward Radisson, and let’s look you over.

The dining room is huge and the House wisely uses every millimeter of space to display its wares, thereby ensuring that no competitor can match it in the variety of dishes on offer. But I am looking at quality rather than quantity, and there is plenty of both.

They have moved with the times to satisfy a changing market by, for example, having a sushi station. A vast array of it was on offer, but I passed on it as sushi bores me rigid. But everybody else loved it, so good luck to them. I am sure it was perfect.

So I jumped to the salad bar and stuck myself into a glorious foie gras terrine. I am convinced that the healthy ‘green’ sushi eaters had no idea what foie gras is, so I ‘helped’ the House by demolishing copious amounts of it. And to accompany the foie gras, what better than an endless supply of fresh raw oysters?

The cabaret started with a singer warbling away at a thankfully low decibel rating, followed by pairs of ballroom dancers whose female partners were so beautiful that they sharpened my appetite for more food – in this case, fish. There was a ‘three way’ salmon: steamed, smoked or gravadlax (picked with dill). There was a salt-baked sea bass which was superb, save for the bones. They should have stuck to the traditional salt-baked cod format.

Still on a fish high, I spied some fresh prawns languishing unattended, so I scooped them up and went to the pasta station which had a superb boiling cauldron of tomato sauce and oregano, which I poured over my prawns and topped with a mountain of Parmesan.

And now a problem. On the way back to my table, my greed punished me by splashing a big glob of tomato sauce on my trousers in a very undignified manner. Mercifully a sweet waitress, Ionela, who was not even serving my table, witnessed my distress and ran, literally ran to the hotel’s housekeeping division to get me a spray of stain remover. My hero!

Off I went to the Peking duck steamed pancakes, correctly painted with hoi sin sauce and layered with spring onions and cucumber. Utterly superb and the House has done this dish since it first opened. The Radisson chef shames and makes a monkey out of every so-called Chinese bullshit restaurant in this land, which cannot make this signature Peking beauty. But the Rad did it!

But all was not well in paradise. The Rad must up its game with a correct selection of cheese, as the cheeseboard was dismissed as an afterthought with rock hard flavorless brie and an indiscernible brand of cheap blue cheese. They had two weak curries, chicken and lamb, both of which begged for a more intense sauce and were devoid of any hot spice whatsoever. But worse of all was the lobster, which had been previously frozen, thereby rendering this, the most fragrant and exquisite fish in the sea, a flavorless hard lump of rubber. They should ditch it and spend their budget on other seafood.

So off I went to grilled lamb cutlets with asparagus and a slice of one of three pizzas. I was too full for any dessert, which was so plentiful it seemed to disappear over the horizon. I finished off with a coffee from a machine making mochaccino, espresso and cappuccino.

I was utterly enthralled with my brunch, but is it the best in town? I honestly do not know as I have to test some other brunches for comparison, but it was so good it is going to be damned hard to beat it.