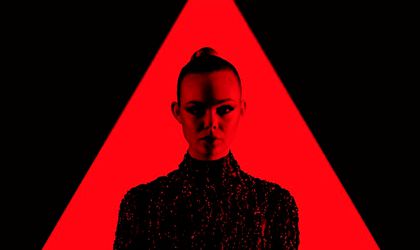 Nicolas Winding Refn’s last feature film, Only God Forgives, was a Bangkok-based crime drama, in which a prostituted child is raped and murdered, a son butchers his mother’s corpse, and one of the antagonists goes around chopping people’s hands off.

So when you hear that the Danish director’s latest movie is about a small-town 16-year-old who comes to LA with dreams of making it big in the fashion industry, it’s no spoiler to reveal that it doesn’t end with her triumphantly sashaying down the runway for Louis Vuitton or gracing the cover of Vogue.

Jesse (Elle Fanning) is dead in the very first scene – supine on a swanky sofa, having apparently bled out from a slashed throat. However – like much about the industry she now inhabits – it’s fake: just a macabre photo shoot.

However, any relief at Jesse being alive is fleeting: in the brutal fashion world of Refn’s depiction, she seems constantly in danger from those around her, whether at her seedy motel, on jobs, or in the company of bitchy older models who resent her rapid rise and relative youth and freshness.

This atmosphere of menace runs through Refn’s previous work: even when a scene is seemingly benign, horror or violence feels imminent. The strong visual contrasts of the cinematography (the director is partially colorblind so films in starkly opposing shades) and electro soundtrack create a music video aesthetic that pulls you in and transfixes you, even while the vile behavior of the characters repels you.

Notwithstanding a few pithy lines about fashion and beauty (“Once you hit 21 in this industry, you’re so irrelevant,” remarks one model), there’s no profound message embedded in The Neon Demon, aside from perhaps that some of the people who work in fashion are Not Very Nice.

The dark underbelly of LA’s highlife has recently been covered by David Cronenberg’s Maps To The Stars, whose plot and characters are meatier than in Refn’s flimsy fable. There is no standout figure here with the pizzazz of Kristin Scott Thomas’s mafia mother from hell in Only God Forgives. (Though there is some interest in Keanu Reeves’s cameo as a creepy motel manager, largely because he’s playing so much against type.)

Watching Refn’s work is more about immersing yourself in a highly stylized and shocking experience than the traditional ingredients of movies – dynamic narrative and dialog, fleshed out and intriguing characters. The Dane favors moody stills of people wordlessly gazing into mirrors or at each other over plot-advancing exchanges or action.

His gruesome fashion tableau may often feel more like a Lynchian art installation or extended pop video, but whether it rouses or revolts you, you’ll never be bored.