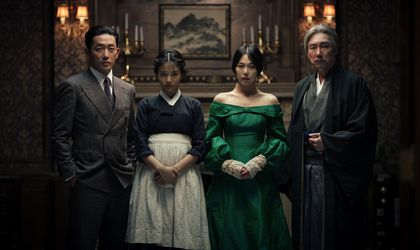 Sex! This isn’t one of those sneaky, “Right, now I’ve got your attention, I’d like to sell you car insurance” taglines. It’s an accurate description of much of the content of this South Korean psychological thriller. You certainly get a lot of bang for your buck.

However, viewers of a less carnal mindset should not be deterred. It’s not trashy, Brian de Palma-style bonking, but tastefully done love scenes. And they don’t detract from the rest of the film, a stylish story of love, obsession and revenge. It has fertile source material: the historical crime novel Fingersmith by Welsh author Sarah Waters, which has already been adapted for the screen in a BBC miniseries. Director Park Chan-wook has swapped the Victorian England setting for Korea under Japanese rule, prior to World War II.

Otherwise, little of significance has been changed in an old-fashioned, twisty plot. A guileless young pickpocket, Sook-Hee (Kim Tae-ri), is hired by conman “Count Fujiwara” (Ha Jung-woo) to assist him in his scheme to snare a wealthy heiress, Lady Hideko (Kim Min-hee). Sook-Hee is to take up employment as Hideko’s maid, gain her confidence, then encourage her to fall in love with, and marry, the count, who plans to steal her fortune.

Hideko lives in a remote mansion with her pervy uncle, who keeps a big library of ancient pornographic texts, from which he makes Hideko read aloud to an audience of wealthy sleazes. How avuncular.

Happy, then, to have someone normal for company, Hideko bonds with Sook-Hee, and the pickpocket starts to have second thoughts about the plot…Well acted and lavishly rendered, The Handmaiden is an absorbing tale, albeit one whose pacing would have benefitted from a less indulgent editing of the love scenes.