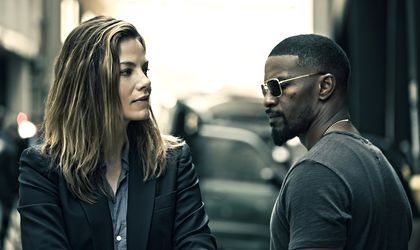 There’s nothing like a kidnapped daughter to get an action hero’s juices flowing, from Liam Neeson in the Taken franchise, to Jack Bauer in TV series 24. So how refreshing that Baran bo Odar’s police thriller shakes up the weary stereotype by having the bad guys kidnap a son instead.

Not that the movie is brimming with fresh tropes otherwise. It starts out with a high-octane car chase, interspersed with scene-setting Las Vegas skyline shots, in which vice squad officers Vincent (Jamie Foxx) and Sean (hip-hop star TI) steal a bag of cocaine from some scumbags.

The duo wangle their way into investigating the case, hoping to bury the evidence, but haven’t counted on sharp Internal Affairs agent Jennifer Bryant (Michelle Monaghan) getting on their tails. She is determined to bring Vegas’s network of dirty cops down! You go, girl!

Unsurprisingly, the criminal kingpins for whom the drugs were destined don’t take kindly to being divested of their goods, and snatch Vincent’s son Thomas (Octavius J. Johnson) as leverage to persuade his errant father to return said narcotics. So Vincent now faces the tough task of extricating his boy from the hands of the kidnappers, before Jennifer busts his ass for corruption.

Film characters looking for abducted relatives seem disproportionately to end up in nightclubs, and Vince’s travails take him into both a club and a casino – that an escape bid from the latter involves a Ferrari should tell you what you need to know about Sleepless’s plausibility. Nonetheless, Foxx and Monaghan help class up the ludicrous and formulaic proceedings, and there is brio in the depiction of the high end of Vegas’s lowlife.