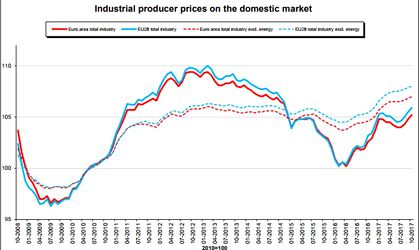 Eurostat estimates show industrial producer prices up by 0.4 percent in October 2017 compared to September 2017, in both euro area and EU28 member states.

This October saw industrial producer prices that were 2.5 percent higher than the same month of 2016 in the euro area, and 2.6 percent higher in the EU28.

In an annual comparison, it can be observed that industrial producer prices rose in all Member States, with the largest increases recorded in Belgium (6.9 pct), Bulgaria (5.5 pct), Poland (4.5 pct) and Ireland (4.3 pct).